In response to The Daily Post’s writing prompt: “In Loving Memory.” 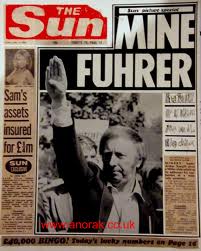 My brother phoned me today. He works in Fife, Longannet Power station, been there about twenty years. Longannet is one of the few coal-fired power stations that is still on grid. It was opened in 1972 and has a capacity of 2400 MW. Most of the other coal-fired power stations in Scotland are closed. That’s not a bad thing. With global warming mankind is on life support and we need to leave fossil fuels in the ground. I understand he really doesn’t give a fuck. Year after year his company gets taken over by another company. They all tell him the same thing. I want you to do more with less. So they tell him what shifts he’ll do. If they say nightshift there’s no extra. If they say dayshift no extra. Weekends no extra. Be thankful you have a job. They’ll shut down one unit. Then another. Then he won’t have a job. That’s life as we know it now.

Let’s look at the options. My brother-in law is a nuclear engineer. I used to go down and visit my sister in Dunbar when she had kids and they both worked in the plant. Torness capacity is 1300 MW.  It opened in 1988. All the other power plants in Scotland provide MW power in hundreds not thousands of MW.

Longannet was literally built on coal. Coal powered the industrial revolution. Not oil or gas. Coal. During the Second World War coal was so important that men were directed into army, navy, air force and coal mines. Jimmy Saville modelled himself as being a Bevan boy. Coal miners were hard men. Life was hard, brutal and short.  In my recent review of Red Dust Road Jackie Kay mentioned that (I think it was) her dad’s brother a miner in Fife got buried in landfill and had to get dug out. George Orwell in The Road to Wigan Pier goes down a pit. This is the 1930s, but his descriptions of getting to the coal face, which could take an hour and half of cracked head and crawling in insufferable heat, blindness, dampness and putrid air could have come straight from Zola’s Germinal of the 1850s French coal fields and the wages, as in the novel, were subsistence level. No more, no less. Workers had to live, but each mining office had an official stamp which they frequently used, to save time, because miners died every day.

Miners really were in it together and this sense of solidarity translated into union leaders that wanted a fair share for those that produced the society we now live in. In the 1960s and 1970s coal miners were the aristocracy of the working class.  Their fathers and fathers before them may not have been paid a living wage, but their unions made sure that they were as well paid as school teachers. Up until the 1990s Britain was reliant on coal for its power stations.

Bankers didn’t hold the country to ransom, because of course nice middle-class men would never do that sort of thing. Whereas miners produced coal that powered the country, bankers produced esoteric algorithms and ways of moving money from A to B so that their increasing share of C and D was moved into their accounts. When bankers weren’t doing that they were producing bespoke ways of moving cash out of the country to avoid taxation. Cheating isn’t cheating when dealing with billlions as the HSBC scandal shows and not for the first time. Government of course being a bad thing and being caught and facing a fine, well nobody died, nobody hurt.

Miners paid their tax and they paid for the nation’s wealth with their blood and the blood of their children. What has happened to the miners has happened to us all. Arthur Scargill said there was a government hit list. He said the Thatcher government stockpiled coal and wanted to fight. Then, of course, he said the NUM had been infiltrated by MI5 and we would be better investing in alternative forms of energy such as wind, wave, and solar. The man was clearly cuckoo. There used to be 84 000 miners, now there are a handfull. Longannet still uses coal in 2015. We bring it from abroad.

Lessons learned. Every man for himself.  Don’t trust the police. Don’t trust the law. Hundreds of miners fitted up by the Scottish constabulary that waved loads-of-overtime-money in miner’s faces. Being charged with an offence meant not just a criminal record but automatic dismissal by the coal company that employed them. Double wammy.

Lesson learned, employers call the shots. Wealth flows from the poor to the rich. Be grateful you have a job. Be grateful there are food banks because almost quarter of a million children in Scotland live below the poverty line. Be grateful Arthur Scargill wasn’t a banker because there would be no telling what victory would have looked like.