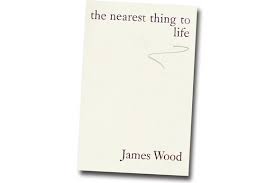 The Nearest Thing to Life begins with a death—that of a friend’s younger brother—and the question, “WHY?’.

There’s no real answer, how could there be? But in death Wood’s looks at the obverse, and how Woods, a bibliophile, has charted the great waters of life by clinging to books and the knowledge of humanity that they provide. ‘The Why question is a refusal to accept death.’ Heaven provides an answer and a justification for earthly suffering, but not one which Wood, whose father was a vicar, could accept. He became a ‘formidable liar’. But this doubleness, this ability to inhabit two worlds that of the clandestine reader looking for truth where he could find it between the inky sheets,  and the church-going son that sung in the choir, and attended to all the usual duties of a public school boy, makes a fiction of life. His father hinted to him that he had an ‘uedifying girlfriend’. The truth was much worse. He was reading unedifying books. He was devouring books indiscriminately in the way a chorister might devour a copy of Playboy or even ‘a naughty book’ such as those written by D.H.Lawrence.

Why? hangs unpicked gloating in the free air.

To read fiction is to understand humanity.

…we peer into the thinking of an Isabel Archer or a Tommy Wilhelm, a Pnin or a Miss Brodie, a Pechorin or Ricardo Reis, there is something of the vertiginous sensation of possessing Jesus’s power…

I’m not as well read as Wood and am not sure who Tommy Wilhelm, Pechorin or Ricardo Reis are, but the great thing about books is they are always there waiting for you to find out. But the boy that reads a book is not the same as the man that reads a book. Wood, for example, despairs about the twenty-year old students he teaches at Harvard being able to understand the ‘why’ of a chapter devoted to Isabel Archer sitting alone in a chair after finding out about her husband’s betrayal. Her ability to see through the gauze of familiarity colours all that she thought she knew. Nothing has outwardly changed, but everything has. Wood’s ability to love the characters has made me think about reading it again, but there is another truth that lies beneath, portraits of the upper class just don’t appeal to me. I can’t relate to, or have the empathy, which Wood has, for some twat that is given too much money because a sick and dying man and his son both thing her beauty deserves to be rewarded. I prefer the sharp deceits of Miss Jean Brodie in her prime. A reader can never be wrong, his judgement godlike.

The shape of Wood’s early reading life, aged fifteen, is shaped by finding among a jumbled pile of books at Waterloo Station the poet Martin Seymour Smith’s Novel and Novelists, A Guide to the World of Fiction. He picked the book or the book picked him? This synchronism of the known and yet unknown shaped his life. Martin Seymour Smith offered him a map. Woods offers a similar map to the untutored reader such as myself.

But what stuck in my craw was not the wisdom about writing and reading, and the insights it provides of man and books, but of the awful prejudice of one of his father’s neighbours.  A Dickensian scholar and Oxford University librarian he was quite happy to proclaim: ‘You could say that the girls who serve in Woolworth’s are the intellectual scum of the earth’. My reading of this is not fit for comment.