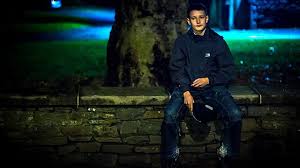 Martin Reed, BBC 3 9pm, Where Am I Sleeping Tonight?

Martin Reed found himself homeless as sixteen and was forced to live on the streets. He knows what it’s like. He meets other kids living on the streets, kids like him. Kids like me. I slept outside for a few nights. Crawled into bushes to bed down. Slept in doorways on cardboard, or the entrance to tube stations with tens of others. Got a carton of soup from the Sally Army.  But that was through choice. I always had a home. When I’m out walking beside the canal there’s a one-man tent squirreled in on the embankment near Radio Clyde buildings. It’s been there for months. A fragile thing. Then we had a welfare-safety net. Now we have the hidden homeless –those that are registered – growing at around ten percent per year.

What we see here is sadness best expressed by Vikram Seth’s poem All You Who Sleep Tonight.

All you who sleep tonight

Far from the ones you love

No hand to left or right,

Know that you aren’t alone.

The whole world shares your fears,

Some for two nights or one,

And some for all their years.

What we have here is the empty promises of Tory reforms. Anthony is the star of the show. The camera loves him. He has been in local-authority care, care homes, foster care. He looks and acts like a child. He’s seventeen and looks about fourteen. He isn’t technically homeless as he had, or has a hostel place, but he finds it safer living on the streets. Brad has a bust up with his mum. He hopes to get a college place. We see him losing out on the free sandwiches being handed out by volunteers. He’s philosophical. He’ll go hungry. Maybe tomorrow. Brad is friendly with Anthony. Most of those living on the street are. He shouldn’t be there, but is. They look out for him. Gary, twenty-six, lost his job and lost his home. But he’s lucky. He’s depressed enough to get £20 a week sickness benefit. The others are registered unemployed but are routinely sanctioned for offences like not turning up at the appointed time, or not applying for enough jobs online. This should be a Monty Python sketch, but it’s a lived reality.

David Cameron has all the answers. New legislation on those out of work for the under twenty-fives will limit benefits to six months with a compulsory element such as community service. It’s an offence to be poor. An offence to be young. An offence to be homeless. With the fight against austerity ongoing make no mistake this will be extended to those over twenty-five. Right-wing ideology in action. Pastor Martin Neimollor died in 1984, but his thought live on.

First they came for the Jews

because I was not a Jew.

Then they came for the communists

because I was not a communist.

Then they came for Trade Unionists

because I was not a Trade Unionist

Then they came for me –

And there was no one left

to speak out for me.

There was a happy ending of sorts. Daisy aged twenty had dropped out of university and had nowhere to stay. She’d been couch-surfing. Sleeping wherever the friend of a friend would let her. She’d even got a job at one point, in a pub. Zero-hour contract. Young people’s wages have dropped by around 13% since 2009. She couldn’t quite work out what she was getting paid. But she went looking for a flat-share. It was quite reasonable, but needed a deposit and a job that paid reasonable wages. She was sacked. Or her zero-hour contract added up to zero. But the boy’s, her fellow students, came through. They put a mattress under the stairs and put a curtain up. Pasted little stars on the slanting roof above her make-shift home. That’s as good as it gets.

God help the young. Oktay Rifat, The Embrace, sums up the degradation of hope in experience.

Warm me the night,

O my trust in freedom

against my mattress thin and blanket torn

Out there is unimaginable cold and wind…

We’ve arrived at this place where children live on the streets and adults source food banks for their family. Great Britain. Aye right!

2 thoughts on “Why do we do this to ourselves?”