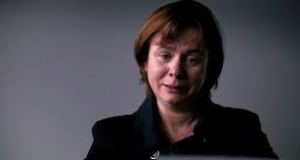 This is a drama about a mother’s grief. Twenty-four-year- old Jenny (Nicola Wren) brought alive in flashbacks was blown up in an underground train on 7th July 2005, ten years today,  passing through Edgware Road tube station whilst reading C.S.Lewis’s The Magician’s Nephew. We don’t know this, but since she was always reading, sent her mum Julie (Emily Watson) an email telling her that she’d bought a new book and would tell her what it was like, that’s the way it is dramatically reconstructed.  Her body was recovered, but not fully intact. A closed coffin. Julie insists is opened for her because she is a mother and also a Church of England minister. She gets to hold her daughter’s hand for the last time before burial.

There are stages of grieving and stages of dying, but the natural order is upset when a daughter dies before a mother. The focus of this drama is Julie. We know, for example, she is a vicar, shown in the opening scenes leading a service. But the viewer does not know, or is not shown, what her husband works as. His role is ancillary. Julie is shown in the kitchen waiting for lunch or dinner after the service, part of an extended family that includes grandparents and youngest son. She gets a call from her second-youngest daughter telling her to turn the telly on. There’s BBC news reports of a power surge on the underground and then updated to possible bombings. Her life has changed irrevocably. What makes it more interesting is it is in an Old Testament way a testing of faith.  Emily Watson won’t be far away when they hand out awards.