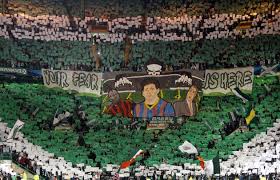 I’d have took a draw before the game kicked off. But I must admit of being a mite disappointed. Celtic are ahead 2-1, there’s around fifteen minutes to go. Izzaguire makes a stupid challenge that gets him booked in the opposition’s half near the corner flag. Two minutes later he makes a rash challenge that should have resulted in a double booking and red card. Stupid is as stupid does. Izzaguire gets away with it. Seconds later he hangs out a big sign saying send me off. The ref obliges. Celts are down to ten men and the clock is ticking. I expected Ajax to score. They did. Another Keystone cop’s type of goal. The ball is swung in. Gordon flaps (as he’s been prone to do, most recently at Aberdeen) the Celtic defenders do what they usually do and let the ball go over their head. Ajax goal. I wasn’t sure if the home team had time to get another. We were lucky for once. Four six foot Celtic defenders again standing in a line, an Ajax player, home substitute, Milik, flashes a header off the inside of the post.

Plus points, we saw it out.  We got a deserved draw. Izzaguire started and was good, as he usually is, going forward. Defending he was Izzy. Can’t fault the ref for sending him off. Gross stupidity should always be punished.

It was good to see Commons start. A man that scored over 30 goals from midfield should in my book always be give the nod in front of plodders that can’t tie their laces. He set up the first and had a goodish game creatively, if not defensively.

Lustig scored a good goal, but wasn’t great and it seems a long time since he lasted ninety minutes. Bringing Ambrose on in the last stages of a game is sometimes an advantage. It means you can’t bring him on again. Ambrose’s first action was to gift the ball to the opposition on the edge of the Celtic box.

I’ll accept the first goal from Ajax was well worked. The second goal was another Aberdeen type. The ball hooked into the box. Defence is no defence and seems to concede the same type of goals week after week. A clean sheet is something I remember from long ago. The worry is we know Ajax will score at Parkhead as will every other team in our Europa league group. Can we outgun them?

I’m not so sure. I expect Ajax to get a draw at Parkhead. But I’m pretty sure we will beat Dundee on Sunday. Hopefully Kris Commons will take part, but don’t hold your breathe. Ambrose will probably start, with Lustig injured (again). Izzy will play, but really I love the wee guy going forward but if he’s going to be that stupid he’s no future at Parkhead.

Delia? Emm. Win the league or resign. Win the treble or get to fuck. Jozo Simunovic, I’ll wait and see, at least he’s not Ambrose who’s moved up the pecking order now we have Boyata. Six foot two, eyes not blue, can’t heid the ball and passes to the opposition, you’ll do? Physically Celtic are bigger and stronger than most teams, why do we lose so many goals from insipid cross balls into the box? If we can’t fix that one then either we’ve got dwarves in disguise or we need to get rid of a few players. Simple.