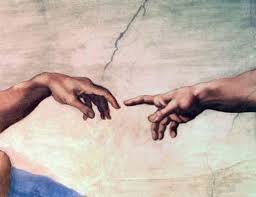 Do human’s consist only of quanta and particles? asks Rovelli. We know that he is going to answer yes and no. It’s not that simple he says. Well, he should try being me for a while, and trying to read a roadmap then he’d understand how complex it is.

The images we construct of the universe, the models we use to explain it are both inside and outside us. The border is porous. More myth than science, more science than myth. Flux sake. Everything is itself and something else. A raindrop contains information about clouds in the sky; water in the ocean. All particles are information and energy combined.

Giulo Tononi, for example, is trying to construct a mathematical theory called ‘integrated information theory’ that quantifies consciousness in information systems (such as robots) and humans. Does it work? God knows. But I doubt it.

What does it then mean to be free and have free will? Rovelli asks, if we are a collection of forces and impulses reacting against each other. His answer is that we, like the universe, are determined not by the hundreds of billions of neurons firing in our brain but by the me and the we and the laws of the universe. It all gets very tautological. The world is complex and we are complex and we meet in that complexity. Michelangelo’s: ‘I saw an angel in the marble and carved until I set him free…’

Rovelli and I can agree on one reality: ‘The brutal environmental and climate change we have triggered are unlikely to spare us.’

2 thoughts on “In Closing: Ourselves”