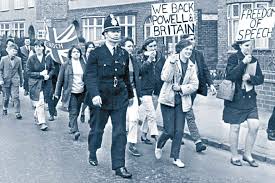 Charles Darwin urged the ‘weak in mind and body’ to refrain from marriage. That’s why I never married. Contemporary disciples of Francis Galton’s scientific racism now favour that dismal science of pseudo-economics. Economic racism doesn’t discriminate against the rich. It is premised on it. The poor are feedstock for those that have accumulated land and wealth. A propaganda war, which we used to call ideology, or even Marxism, has been running against those without both for the last thirty years. It’s based on trickle-down economics. That means rich folk saying fuck you, I’m doing alright, whilst continuing to take an increasing share of the national income from the poor. Thomas Piketty, Capital shows with extensive research and an analysis of national figures the feebleness of this approach.  To paraphrase the US giant, General Motors.  What’s good for the economy is good for the rich, or so they keep telling us –ad nauseum.

The demonization of the poor is highly popular entertainment, cartoon demons that can be traced to the loss of the idea of social security. All being in it together. Remember that old David Cameron whopper, from our soon to be, Brexited, Prime Minister. Look at our glorious history. This was epitomised by the idea of homes fit for heroes after the First World War. After the Second World War, Britain led the way with the Beveridge Report and the welfare state and modern states followed our lead.  The American term welfare was exported back to us at great social cost, a  catch-all term and negative imagery carried by association. Prostitutes, junkies, alkies and council-house scum. (See for, example, ripostes from Owen Jones’ Chavs or Lynn Hanley, Estates.) Proof that welfare wasn’t working and dragging the nation down. Poor people,  whipping boys for the private sector and the top five-percent of  Eton educated and Oxbridge sponsored prevailing government ideology. Indeed, like Happy Gilmore with one golf club, they continued to beat all before them, slaughtering the poor, the public sector, and those on welfare while sweeping those before them in election after election with one idea. Rip up the social fabric. Trust us.  Give them less and us more. Nicholas Timmins, The Five Giants. A Biography of the Welfare State joked about the Tories mimicking the George Bush, Texas model, and meeting in a closed room and allocating public resources to their chums to run as part of their personal fiefdom. Who’s laughing now? Look no further than the recent debacle of those rich citizens paid rent to build and maintain local-authority schools, and even though bits were falling off, structural damage some cynics may call it, but moving sideways, with a neat trick economists call vertical integration and running the schools they build. This wasn’t called profit, but economic rent. Getting what they were due.  A quick fix was the idea of calling local-authority schools, Academies. In any language this is called monopoly. For all its faults the European Economic Union wasn’t that keen on these ideas, hence their challenge of Google’s monopoly powers to shape choices on the internet. The European Economic Unions determination that companies such as Microsoft, Apple and Facebook that have hundreds of billions in revenue pay some tax. But, of course, London is the greatest money laundering system in the world.   In comparison, try counting on one hand the number of media posts and television programmes depicting the lives of those on benefits, receiving government money. The latest ruse was to show that some of them had the gall to live in houses with more than one bedroom. Smokers. Drinkers. Obese. Round up the usual suspects. If there was such a thing as the Anglo-Saxon English race they were losing was the subtext and war cry.

Enoch Powell’s ‘river of blood’ speech in the late sixties tapped into popular zeitgeist. If they’re black send them back. A group of white working-class men were shown chanting, ‘niggers go home’ on a recent More4 programme, ‘Born on the Same Day,’ which showed the experience of a Jamaican immigrant, Ewart, growing up in multicultural Great Britain.

Remember the signs on private-let housing:

Add to that list: No DSS. NO WELFARE. NO REFUGEES HERE.

Brexit  tapped into a popular state-sponsored hate campaign.  Racism has long roots. Rudyard Kipling summed it up. ‘All the people like us are, We, and everyone else is They.’ It’s no coincidence that Robert A Douglas in That Line of Darkness, The Shadow of Dracula and the Great War has consecutive chapters on ‘Fear and Loathing of the Underclass’ (the working class) followed by ‘Xenophobia, Anti-Judaism and Anti-Semitism’ (replace with anti-Muslim rhetoric). It’s worth quoting Douglas below on those nineteenth-century patterns when Britain had an Empire to fleece, patterns which are recognisable today, with spokesmen such as Nigel Farage echoing the same sentiments, playing on xenophobic fears of the other, and being taken up by the Conservative Party and possibly the next Prime Minister, Boris Johnson:

Several commentators worried about Britain’s capacity for assimilating such large numbers and potential economic difficulties; however the more virulent spokespersons fed on the fears of crime, disease and tribalism to lobby for immigration restrictions…

A Conservative Prime Minister, Edward Heath took Great Britain into the EEC. Another, David Cameron, has taken us out. Britain no longer has an Empire. It no longer has the protection of a market to which we export most of our goods and services. We currently import around seven percent more than we export. That’s one deficit we really should worry about. When trading blocs such as the US and China, and now the EEC, play hard ball with small nations that have little or no leverage who can blame them? For we’ve voted to become a third-world nation. Fear of the other has made us a pariah nation. But the biggest fear is other nations will follow. Then with most countries resorting to protectionism there will be no common market. No market at all. What brought the world wide and general depression of the 1930s to an end was the Second World War. What brought the ideology of xenophobia and the pseudoscience of eugenics to an end was the Nazi death camps. Little England has never looked or felt so small. Fuck you, I’m alright Jack the triumphant calling card. For opportunist politicians such as Boris Johnson (and Donald Trump) that’s the only invitation they need. Fear of the other. I fear these ghoul-like creatures we have voted for most of all.