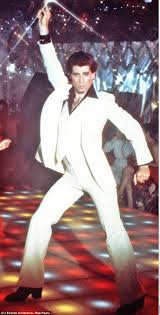 You can see the shell of the La Scala from Second Avenue. I can’t remember the first X-rated movie I went to see there, but you can bet the fear on my face was real enough as I got to the turn at the top of the stairs and I expected the woman taking the tickes to eye me up and say, ‘Nah, son you look about fifteen’. Which would be about right, even though I did have a proper suit jacket on and open-necked collar to somehow make me look older, the more mature kind of man that wanted to see Saturday Night Fever.

My mate Burnsie went all the way with the white suit and black shirt, aka, John Travolta. I wasn’t that stupid or that daring. In a rare sighting you might have seen me falling out of the emergency door of a moving bus in Ramelton, somewhere in Donegal, with a white-jacketed jounce, and giving  it skid marks in all the wrong places, but let’s face it that’s what drink does to you. That’s Saturday Night Fever on a Tuesday or Wednesday or whatever the hell day it was. Now Nik Cohen has come clean and said Saturday Night Fever didn’t exist. In fact he just made it all up. I need to re-think my whole life and my propensity to wear parachute material for all the wrong reasons.

My first stop was the off sales. Only then could I think myself into Night Fever falsetto. Then I read Nik Cohen’s story which was the truth of Vincent and his crew’s hand gliding and foot finding. Published in ‘New York’ magazine  7th June 1976 it inspired  those in the disco scene to cut their balls off and dance, dance, prance and with the right kind of parted hair and with the right kind of clobber to take a bullfighter’s stance. Inspired Hollywood to go after the next blockbuster that would gross almost $300 million at the box office in 1976, and me to fall off a moving bus, while swearing it wasn’t really my fault.

I do a lot of reading for a little known group called ABCtalers. A weird bunch that insist we never meet anywhere but on the page. ‘Tribal Rites of the New Saturday Night’ by Nik Cohen.  No cherry for you Nik. I’ve nothing against making things up. I do it all the time and imagine I could rattle something like this off in a few hours. But ‘Tribal Rites’ is so damn boring it makes you glad you’re not fifteen anymore and not a proper writer. New York that prestigious capital of magazines and books must have been a simpler place in those days.  Or I’m simpler. I no longer fling myself from buses. There, I’ve done it. Admitted it was my fault and not the feckin drivers. Like Nik I feel better for it. I’m a fraud.