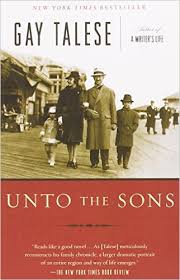 I’m not sure how to write reviews. Usually, I start by saying something about the writer, such as I knew nothing about Gay Talese until I read an interview with him in The Observer Review, which focused on his latest book, the name of which I can’t remember, but the story centered around a man who ran a hotel and peeked through the ceiling at the room below and the couples that had sex in them. That piqued my interest. Next up, an online interview with Gay Talese in The Paris Review. I liked what he had to say. So I went to my local library (yes, libraries still exist) and got a book out. Quiet a hefty book, 629 pages and the author’s notes. It could have been any of Talese’s books, over almost a fifty-year period he’s written, according to my flawed reckoning, seven.

Unto the Sons is an epic that spans the Napoleonic wars, the taking and making of Italy by Garibaldi and the First and Second World Wars. To call it autobiographical would be an understatement and a bit like calling War and Peace a story about Napoleon’s retreat from Moscow. Napoleon does feature here, a background figure. Flickering in the foreground was one of his generals Murat, who was married to his sister (or sister-in-law) but was known as the King of Naples, a dismissive term in both books, but here he appears to lead a rebellion and take back what he imagined to be his kingdom from the Bourbon king, Victor Emmanuel III. Murat has a walk on role, because Naples is near Maida, in the South of Italy. That’s important because everything springs from that soil including the people and their customs and their antagonism to the people in the North of Italy who take everything good and give nothing back.

Gay’s father Joseph is a tailor, made good in the new land, with his own business in Ocean City, New Jersey, a naturalized citizen, jingoistic in support of the war effort, but fearful for his relatives fighting for the Italians and the Axis powers, relatives of his brothers and sisters and sons and daughters of the soil of Maida. He prays daily to St Francis of Paola, a son of the southern Italian soil and a miracle worker. Like many young boys Gay finds this distasteful and embarrassing.

Usually, when reviewing a book you stick in something that spoke to you. Something that resonates. Perhaps even to show the agnostics that you have read the book. On a day when Donald J Trump becomes the forty-fifth President of the United States I was struck by a passage featuring one of the protagonists that the book follows (based I guess on the diaries he left), Joseph’s elder cousin by four years, Antonio who had fought for Italy and France in the First World War, and whom a younger Joseph lived and worked for briefly in Paris, before moving further from his homeland to America. Here Antonio, an avowed Fascist living and working in a Paris not yet occupied by the Germans, takes stock of the Duce, Mussolini,  whom he privately thinks has done some good things and can’t really do any great harm (and we know what happened next) and his thoughts mirror my own about Trump’s possible trajectory.

Antonio saw Mussolini as a man with more bark than bite, an egotist with perhaps a neurotic need to gain other people’s attention, yet he thought the Duce could be reasoned with, must be reasoned with, before he embraced Hitler as his strongest ally. Mussolini was a dictator, but Antonio believed, only a dictator could have restored order in Italy during the strike-ridden 1920s.

Blackshirts and black armbands. I’ll wear the latter, a day of mourning for the election of Donald J Trump and the belief that he can make America great again. I’m in mourning for the world I knew.