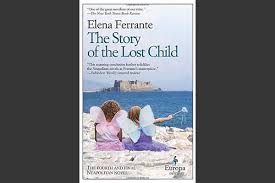 The Story of the Lost Child, Elena Ferrante’s fourth and final novel, is largely set in a working-class district of Naples. The narrator in each novel has been Elena Grecco, born the reader is told in August 1944, and this narrative takes us up to 2005 and almost the present day, when she’s an old woman in her late sixties, sitting on her balcony, looking over the Po, a view of Vesuvius and the semicircle of Naples. She is content,  a writer, in the mould of Elena Ferrante, whose books set in Naples have been widely read, translated, and made into acclaimed films, but whose body of work had begun to fade from public view, but is brought back to prominence by the publication of an eighty-page novella, A Friendship, which is a fiction of a fiction telling of her love of ‘My Brilliant Friend’- based on Raffella Cerullo, also called Lila, and their extended families and friends – which is the title of the first book of the quartet of the Ferrante’s novels. Still with me?

Elena Ferrante is a pseudonym of a writer who writes about Naples. A common motif in her work is the madwoman, who everyone knows, sees out of the corner of their eye, but disappears from view. Drowning in love, metaphorically and often literally. To be avoided at all costs in case they too, sane but susceptible women, are dragged down. Class and poverty create many links, often with violent outcomes. The surprise here is Lila jokes it is her that has become the madwoman, akin to her aunt Melina, a widow, who lived up the stairs and had a relationship with Donato Sarratore. And for most of the forth volume Lila lives in the house below Elena. To recap, they both had an affair with Nino, Donato’s son, at one time the great love of their life. Lila created a fiction that her son Rino was Nino’s son and not her husband, Stefano’s, but it was later proved the latter’s child and not the former’s.

This story begins in 1976 when it is Elena who is, once more, besotted with Nino. She leaves her husband Pietro Airota and takes her children Adele, known as Dede, and Elsa, and goes to live with her true love, who has also promised to leave his wife and children. There’s  mirroring here, and in the text, between Elena and Lila, Janus faced, Lila left her husband for Nino, Elena does the same.

The Solara family, who give out loans and deal in other people’s misery, are the adult ogres of the tale. The killing of the widowed moneylender, with her little red book, Manuela, mother of local thugs Marcello and Michele, muscle, who make others pay, goes unsolved, like the death of Don Achiche, but not without blind retribution. Both Marcello and Michele are at different stages and in different books, in love with Lila, as most men are, but it is Nino who wins her and who slips through the years, also a less noticeable and perhaps less lethal, parasitical type. He uses women such as Elena and discards them as he works his to becoming esteemed, an elected member of Italian Parliament, bloated in body and mind, but Lila is the one that got away.

Elena and Lila both fall pregnant at the same time. Lila has a child with Enzo Scanno, who rescued her from Nino and they have a little girl, Nunziatina, called Tina. Elena has another little girl, with Nino, whom she called Immacalotta, pet name, Imma. As Elena comes to realise these were the names of her and Lila’s dolls, mysteriously delivered to her in a package in the epilogue. Ugly dolls, Tina and Nu, but much loved then, pushed into the basement, where bad things happened, more than sixty years earlier (see, for an example of this, the denouement of Ferrante’s debut novel, The Days of Abandonment)  never to be found, but Lila had led her friend to the ogre, and local Mafia boss, Don Achille to demand compensation, which to their surprise the children received. And their children Tina and Imma take to each other in a way that mirrored their mothers. Tina is the brilliant friend, the child prodigy, but Imma, in her own way, is also brilliant. Then one day, when Lila is talking to Nino, Tina disappeared, never to be found.

This was unexpected. It shocked me, but really it shouldn’t have. The story is in the title – the lost child. Lila doesn’t recover but lives on, waiting, and then working out a way to eradicate her story. Elena writes the story of their friendship and breaks the promise of childhood that she wouldn’t. Lila disappears.

Lila’s trajectory from preteen novelist, beautiful teenage bride, designer of iconic footwear and builder of a computer business is all faithfully chartered by her friend and follower:

Here’s what she had done, she had deceived me, she had dragged me wherever she wanted, from the beginning of our friendship. All our lives she had told a story of redemption, but this was hers, using my living body and my existence [italics in the text].

As a reader you’ve got to be glad to Ferrante for all her deceptions and for her narrator Elena’s moment of illumination. All redemption is written down, waiting to be found. Amen to that.