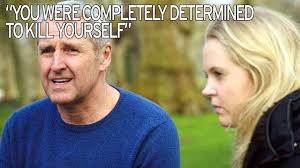 My mind went blank and I started to type Alzheimer’s into the search box of Channel 4’s programmes. In a way that’s instructive. You can just start again, wipe out what went before and retype. We are learning about Alzheimer’s. I can throw in phrases like amyloid plaque. Perhaps do a simple drawing of what it means in a cave of dendrites. But I don’t really know what it means, not yet, although my mum had it. In a way the truth about anorexia is a lie, because it assumes there is a simple truth based on subjective experience. The smoking gun is, as with Alzheimer’s the resources we allocate to the NHS and, in particular, the cinderella Mental Health services, which traditionally has been the poor man of the care sector, both in terms of the money spent on it and empirical outcomes.  Mark Austin uses the analogy (which I’ve frequently used myself) if you break a leg you phone an ambulance and get admitted to hospital. The analogy breaks down when the surgeon comes round and says something along the lines of things they (might) say in mental health services: ‘we think we’ve fixed your broken leg. You might need to hop a bit, and it might be sore, with one leg shorter than the other, but that’s the best we can do. Don’t call us back and expect miracles of mobility’. In other words, empirical outcomes in the mental health service are, at best, dodgy, but it’s nobody’s fault but your own.

We need somebody to tell us this is a very bad thing. Who better than his Royal Highness Prince William with his stiff upper lip, wobbling slightly. No common man need mention American socialite Wallis Simpson, of you can never be too thin, or rich, fame. And the truth about anorexia is there is no common man here, no one truth, but lots of fake news. Jeremy Hunt, who favours privatising the NHS, but is Secretary of State for Health, for example, tells us there’s ‘no quick fix’ but by 2020, 95% of young people with mental health issues will be able to see a professional (psychiatrist, presumably a British psychiatrist, and not one of those foreigners we’re trying to exclude) within four weeks and within a week if there case is urgent. I thought every case was urgent, but what do I know, I’m not a health-care specialist. We see here, as we see everywhere else, cases being flipped and weighed and found wanting and parents travelling hundreds of miles, where their daughter or son, finally finds a place in some private hospital in Edinburgh. I wish somebody would explain that truth to me. How it profits rich folk to take care of sick folk, but it still works out cheaper for us all.  Poorer folk with, in modern parlance, mental-health issues always find somewhere closer to visit. It’s called Her Majesty’s Prisons.  We’ve got Princess Diana the godmother of anorexia, looking pretty chic in culled archive images. The largest epidemic in every sense is, of course, the flip side of anorexia, obesity. The poor man’s disease. No need to mention Stephen Hawkin’s criticisms of Tory privateers and implicitly Jeremy Hunt’s stewardship of our NHS.  Now we can start talking truthfully about black holes.

Ask yourself a simple question, if I stopped eating tomorrow, who would notice and who would care? Does it matter? Do I matter?

Roxane Gay, Hunger: A Memoir of (My) Body is a better place to look for questions of toxic imagery and culture than this programme.

‘Every body has a story and a history’.

‘The story of my body is not a story of triumph. I don’t have any powerful insights into what it takes to overcome an unruly body and unruly appetites. Mine is not a success story. Mine is simply a true story.’

Upper, middle-class, ITV newsman, Mark Austen and his daughter Maddy go on a journey in which they seek to explore the boundaries of anorexia and the health service, postcode lottery, in the less than United Kingdom, but only take us to NHS Theresienstadt.