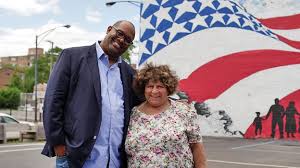 You know the format, actress Miram Margoyles, a self-proclaimed fat, Jewish, lesbian old lady, travels across America finding out what’s what or who’s who or something intelligible to report or see. Here she visits a summer camp in Indiana. Stars and stripes and saluting the flag, hand on the chest at 7am in the morning, type of place. That’s how you build a nation. About 30 years ago, or more, I applied to go and teach soccer in Summer Camp in America. Needless to say I was a charlatan with two left feet, but they weren’t to know that. I remain a charlatan with two left feet and watching Miriam is the nearest I’ve been to America or Summer Camp. $700 a week sounds a bit pricey, but they run programmes for poor kids, so they too can turn into good Americans.

Miriam’s next stop was a correctional facility. America jails about two million of its citizens, more than every other nation in the world combined. Every year that number grows larger.  If you’re black and poor you can expect to be corrected as some point in your life. But this is a quick in and out visit for Miriam. A good public relations exercise  for sheriff, Richard K Jones who runs a jail in Butler County, Ohio.  He’s an elected official. Looking at him you can see why Ohio has one of the highest overdose rates in the country. Richard K Jones is shown acting as cheerleader for the now President Trump. This is Trump country. The kind of place where the solution to the war on drugs is more war on drugs, build more prisons, shoot more black men. At one point that’s practically what the good Sheriffs wife said at the dinner table. I may be guilty of putting words in her mouth of course. She did say it was a man’s role to work while she brought up her fat daughter. No she didn’t say that exactly either. Having a photo of her husband and the smiling rapist and sex pest of a president smiling at the camera does that to me. It would be interesting if Richard K Jones could find it in his heart to find a place for President Trump in his Ohio prison. The revelation that Ronald Reagan thought that all mental hospitals should be closed because they were full of mental people not prepared to work puts him higher in my estimation than Trump.  He was fruit bat crazy but not dumb. And it was President Reagan with his Star War’s programme and massive state spending that ushered in the defence mania while cutting the budget of every other department. Hold that. He admitted he was a ball hair from starting a nuclear holocaust. Yet we look back on that charlatan with nostalgia to the good old days. Let’s hope Holocaust stays off the menu. Miriam, despite being a daft old bat, was wondering exactly what I’ve often thought –how can a nation claim to be Christian while screwing their neighbour into the ground and praising the lord and their country?

Last visit for Miriam was some backwoods Tennesseans.  Well, they weren’t actually from Tennessee but they were white and thought that by digging a hole and hiding out they could survive nuclear winter. Oh, dear, hide behind the blanket time. One of the backwoodies said to Miriam that the Lord had spoken to him and told him Trump was his man. Bring on nuclear winter is all I can say if we’ve become that dumb.

It’s perhaps worth quoting Kafka here to save our sanity.

You do not need to leave your room. Remain sitting at your table and listen. Do not even listen, simply wait. Do not even wait, be quite still and solitary. The world will freely offer itself to you to be unmasked, it has no choice, it will roll in ecstasy at your feet.