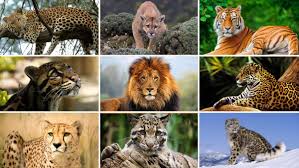 Big Cats are killers. They have adapted to every corner of the globe (not that a globe has corners). So successful are they in the Australian outback Tim Winton tell us readers in his book The Boy Behind the Curtain they have pretty much helped destroy most of the indigenous wildlife.  I’ve also read in the papers about leopards in India taking children. My own cat seemed unconcerned. It does bring back mice.  Of the 40 big cats, 33 are small cats. Downsizing seems like a good idea in these difficult times. The real killer is, of course, man. We literally create deserts of lands and seas.

This celebration of cat life is one of the wonders of the world. Beautiful and full of awe. What’s missing, of course, is David Attenborough. We might see a rusty-spotted cat 200 times smaller than its carnivore cousin the lion, but with an impressive 60% strike rate (where do they get that stat and who’s counting the mice and small birds?) it’s king of the Sri Lankan jungle. In the Himalayas we see a snow leopard doing a pee, otherwise known as marking its territory and hoping a mate might swing by. I’ve done that as well.  There’s a pride of Africa lions – no jokes here please about Gloria Gaynor and I torch songs I Will Survive. (No you willnae) Then there’s those cubs whose mum looks like BagPuss, but it’s wee  Pallas cat from the steppes of Outer Mongolia. Not Steps on Top of the Pops singing the Bee-Gee’s number Tragedy.   But the next best thing if you’re a cat fan, which I’m not. But you know the next line. I wouldnae be cruel to one.