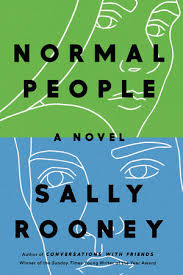 I spend more of my life reading than any other activity, but then, promptly, forget everything I’ve read. I’m useless.  So, of course, I’m interested in new writers. Unfortunately, I also do a bit of writing. There’s a biblical quote for every circumstance. ‘For where your treasure is, your heart will be also’. Sally Rooney is one of the new big things, Normal People was long-listed for The Man Booker Prize.

I never claimed to be normal, but it’s one of those twisted things smart young folk would say. I’d six pints of Guinness and dived into Normal People and got to page 162.

Marianne had accepted an offer to spend her third year of college in Sweden. She’ll be leaving in September and depending on their plans for Christmas, Connell might not see her again until June. People keep telling him he’s going to miss her, but until now he’s been looking forward to how long and intense their email correspondence will be while she’s away. Now he looks into her cold interpretive eyes and thinks: Okay, I will miss her. He feels ambivalent about this, as if it’s disloyal to him, because maybe he’s enjoying how she looks or some physical aspect of her closeness. He’s not sure what friends are allowed to enjoy about each other.

I’ll simplify the story of Lady Chatterley’s Lover (which I’ve never read) and use it as a template. Here we have Marianne, the rich kid, fucks Connell, the poor kid, whose mum works as a clearer for their family. This begins January 2011, when they’re still at school and jumps forward every few months. Connell fucks Marianne. They’re both fucked up in a different way, but both are brilliant scholars and go to Trinity College, Dublin. Role reversal. Connell, the poor but popular kid, is just poor and unpopular at Trinity. Marianne flourishes like a herpes virus and like one of those daft films where the ugly kid takes off her specs and everybody realises how beautiful she is…Yeh, well, let’s carve on a tree with a love heart around it: Connell lvs Marianne: Marianne lvs Connell. Now he wants to send her fucking emails. Must have been that outbreak of classic show and don’t tell and cold interpretive eyes.

These are not my kind of people. There’s a story. What happens next? The secondary characters are scrawls on a page, an there’s  little difference between somewhere in Germany, Canada, Dublin or the bog streets of some little Irish town. The sense of place that is vital for me to care about the characters, well, who knows? Normal People? It’s not that bad. I’ve tried it, didn’t work. You might be more normal. Read on, or wait and watch the film version.