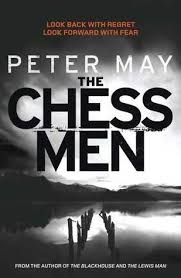 Peter May is one of those authors I kept meaning to read. But like everybody else I’ve got a stack of books waiting and no time to read them. I’m glad I found the time to read this. He’s good. He’s very good and the characters he creates swagger out of the page and into your life, so you care about them and what happens to them. The characters that stand out most are the Scottish islands, such as Lewis, Harris, Uist and Barra. The islanders on the windswept shores of the Atlantic are a captive breed and people of the land that move with the rhythms of the sea and sky. ‘Fin raised himself up on his elbows and saw that the stone at the entrance had been rolled aside.’ The mirroring of Jesus risen,

The sight that greeted him was almost supernatural. The mountains of south-west Lewis rose up steeple all around, disappearing into an obscurity of low clouds. The valley below seemed wider than it had by the lightning of the night before. The giant shards of rock that littered its floor grew like spectres out of a mist that rolled up from the east, where a not yet visible sun cast an unnaturally red glow. It felt like the dawn of time.

A miracle has occurred and Fin and his companion Whistler are the only two that witness it. A loch overnight has disappeared. Fin is an ex-cop that has moved away and moved back to the islands bringing the baggage of that life with him. Whistler never made that fateful step to the Mainland and the chance of another life, a different life, but Whistler had always been different, thrawn and determined to follow his own path, whatever the cost. The black house and the croft he inherited are his life and a natural genius and affinity with sea and sky. Childhood classmates and linked by kinship to a sunken ship and lives lost yards from the shore after the Great War they are more than friends and less than brothers.

The essence of drama is conflict and May cleaves the easy renewal of their childhood camaraderie and past by making Fin an employee of an incomer Jamie, who owns the land and the people of the land and threatens to legally take away Whistler’s home because the latter refuses to bend his knee and pay feu duties and follows the natural god-given law and  takes one for the pot from Loch Suaineabhal. Big Kenny, who works for Jamie, has already take Whistler’s wife and child. The loss of the loch may have been a natural phenomenon called bog bursting, but the presence of a plane in what was once deep water, with a body inside, of Roddy’s body inside, another childhood friend that was part of a group that created a haunting Island sound (think Clannad) and achieved international success moves all the pieces and plot points on the board to new and potentially check mate positions.  And there is no way of getting out without loss of life or loss of wife and child.

And if Island life doesn’t sound complicated enough throw in the femme fatale that everyone one in the band loved and lost. Finn the narrator tell us:  ‘Mairead Morrison, who played the fiddle and sang. She had he voice of an angle, a body that would arouse any teenage boy’s passion, and a smile that would break your heart…I fell in love with her the first moment I saw her.’

As did Whistler and Kenny and Roddy and, well, you get the drift. Mairead Morrison is Beyoncé and Madonna combined with ‘startling Celtic blue eyes’. The band meet and greet each other at the Nicholson Institute in Stornoway. The backstory of how they left the Islands and achieved success and how a crashed plane with a body inside it came to be in the loch is what drives the plot forward. There’s a subplot involving another, former, member of the group, the Reverend Donald Murray who is being tried by a quorum of The Free Church of Scotland on the charge of breaking the commandments and killing someone is self-defence. ‘Thou shalt not kill’ trumping the latter, was being debated. But this narrative threat seems to have come from the backstory of another of May’s novels that someone better read than me may be more familiar with. The people of the Islands know their own and May paints word pictures and plots points more skilfully than a chess-grand master that you’ve got to just say, like Whistler he has a God-given talent and serves the land and worship of the word well.