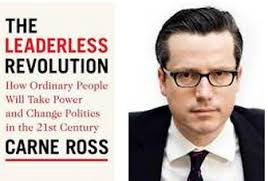 This is the kind of programme I felt I should watch. For a start it’s got Anarchist in the title. I could mention Kropotkin, but I don’t know who he is, or Sid Vicious, Anarchy in the UK. For me it’s more an attitude. Life Without Government? Like Huxleys’s Utopia, I’m not sure it’s possible but Carne Ross seems to think it is. I hope he’s right.

What privileged position does Carne Ross come from that he gets his own documentary and an hour of our time to espouse his views and tell us what he thinks? Well, he’s an ex-diplomat. That should be impressive and for someone like me, working class and poor, you’d probably assume I don’t know, or meet, very many diplomats. But you’d be wrong. Old Lawrie who drinks in the same shithole as me, has a daughter who was a diplomat, and he’s been to Moscow, visiting her in the Foreign Office and some other places in China, but we’re not really interested in world peace because we’re watching Celtic and that’s all that matters. He loves Celtic and is always wants to ‘put one on him’ (punch him in the face). It’s his war cry when watching. His daughter is diplomatic when she hears him or comes to pick him up when he’s had one too many, but listen, who’s counting.

Carne Ross isn’t that kind of diplomat. You’ve just got to listen to his name. He’d fit in with the Brown and Blairs and ex-public school boys that do the right thing by serving their country, and even then he claimed he wanted to be –you’ve guessed it – not Prime Minister, like servant of the people David Cameron, nor Chancellor of the Exchequer, like that nice man George Osborne, but a diplomat.  He’s the kind of guy that stood behind Blair at the United Nations in New York ready to whisper in his ear and briefs him on the latest embryonic imbroglio in the Middle East.

What we need now is a Damascene conversion. You probably read in Acts about Saul’s conversion. He’s happily going along working day and night persecuting men and women that are Christian in a fashion similar to the way George Osborne persecuted poor people. A flash of light from heaven blinds Saul and allows him to see.

Carne from his apartment witnessed 9/11 and the planes crashing into the World Trade Center. He remembers the smoke and the ash lying on his window for months afterwards. These are novelistic details. He watched George W Bush ramp up the search for bad guys to blame so he and fellow Americans could play the good guys and take care of business. This led to wars in Afghanistan and the invasion of Iraq. He was friends with government scientist David Kelly, who in his role as weapons expert, said unequivocally there was no evidence of weapons of mass destruction in Iraq. In other words there was no reason for the invasion of Iraq. He had a front-row seat of the cover-up of ‘fake news’.

Pause there. Carne took a year’s sabbatical to think and read.  If you’re an ordinary Joe don’t try that at home. Don’t shout at your boss on the way out, I’m outta here, see you next year and I might come back as an anarchist you fuckwitt.

He didn’t know that at the time. He lucked into it in the same way that Saul/Paul bumped into Christians. It seemed obvious that those rich guys that were screwing the poor and were quite happy to invade other nations weren’t to be trusted.

Evidence that we can do things differently. Ho-hum. George Orwell’s Homage to Catalonia. Carne interview Catalans that were there and some that were not. They all agree that if Stalin hadn’t betrayed POUM (the Anarchist Movement and Hitler hadn’t been developing his new blitzkrieg tactics and if Mussolini hadn’t sent troops) then things could have turned out different. Even if not the roots of Anarchism remain in a collective that took back some unused land and used it to farm and build houses. Here we see them building their own houses. These are called outliers. Think of the images of deprivation George Osborne used to slaughter those on welfare. Outliers that smoked and drank and had eight children.

He sees Anarchist roots in the Kurdish-run region of Rojava, which helped defeat ISIS but is bordered by Turkey and Syria.

He sees it in the ‘Occupy Movement’.

I don’t. And I’m sure the Chechens also thought they would be able to get autonomy from Russia, only to be crushed. Let’s not mention China, the new number one superpower and hardly a case for free speech and anarchism. And let’s not forget George W Bush was so dim he had to wear socks labelled ‘left’ and ‘right’ but compared to the moron’s moron that is the current President, well, I’ll let you fill in your own analogy (if you need any help with what analogy means don’t ask Donald J Trump). And the hawks of yesteryear seem like Christian doves compared to this US cabal of warmongers. I’m not betting against a world war. North Korea, of course, is only too happy to show the world its weapons of mass destruction. And let’s not forget the moron’s moron and the Paris Agreement on Climate Change he did not sign. That means in the short term millions on the move. I see anarchy, but not the vision  Carne Ross has of it. More like the four-horsemen-of-the apocalypse anarchy so beloved by novelists and the bible.  I pray he’s right.