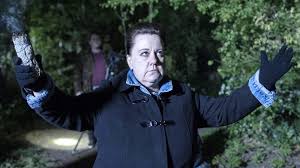 This is my guilty secret, takes me right back to my childhood. I’m a BBC 4 kinda guy. The kinda guy that sneers at people that watch soap operas like River City, Coronation Street, Emmerdale or Question Time. Yet, here it is, factual stories based on a recipe borrowed from Hammer House of Horror. Remember the rule. Vampires. Scary Christopher Lee. Wrap the blankets around your neck and hope they bite your wee brother in the bed next to your own. Sit in the sunlight. Or if it’s a shark, do that Billy Connelly thing and hold up two fingers with your feet planted firmly on the ground.

Terror in the Woods.  Do not get lost in woods with a capital W and camp beside the most haunted cathedral in the world which has access to a long forgotten plague pit and the gate to hell. Two teenagers that like to mess about in front of the camera and play at being dead gay with each other, but not in that way, spend a night in a wood. There’s a mock-up of what happened. Scratching on the tent. The portable DVD doesn’t work. Your torch doesn’t turn on. And you keech your pants as the ghost of a wee lassie with no eyes floats through the tent. Who need the Blackpool rollercoaster?

Then you go home – with a big scary ghost in your haversack. Aye, the ghost knows where you live now. Ghost sat-nav. So you call in the Scooby Doo bunch of ghost busters. What do they do? Whistle it down. Hi, silver bullets. Crosses. Exorcisms and priests. Nah, tell the ghost to go and shaft itself, but it doesnae.

And you get the two wee guys, now a bit older saying we kidded on about ghosts until we met a real one. See telly, that’s educational, doesn’t need to be BBC 4 or a version of Ghost on Benefits. Smoking.

Ghost in the Wall. So you’ve got this woman with dyed red hair telling you, aye, I’d seven kids and eh, my man’s dad died in that chair. We could smell his cigarette smoke and he was doing a bit of haunting. He dragged my baby daughter through the walls and held her like a rat in the spaces. When I dragged her out her eyes were black. You know what they say, don’t go into the cellar. Move house. Nah, hang about. He was only kidding on. He’s settled down to baby sitting and making knocking noises. Families, eh, they fuck you up.

Hellfire Farm is right next to Terror in the Woods, but without the trees. It’s deepest darkest Wales, boyo. Look out for a massive electricity bill hitting you right in the eye. Ghosts are murder on the electricity. Shining pupils in the corner of the room. Farmyard animals that mysteriously hang themselves and a pig that does laps of the farm and runs itself to death. The focal point seems to be the dad. He seems cursed, but quite likes it. He’s like a pig on speed, drawing all these pictures that look vaguely like something you don’t want to look at, but can’t look away. Option A, go to the local cinema and watch The Shining, or jump in the car and fuck off. No. This couple and their children carried right on. It nearly cost them. They brought in an exorcist. He burned the Harry Potter books and the Satanic Bible and all of da’s painting and the outstanding electricity bill no one on earth could pay.  You know what happened next, don’t you? It followed him home. I want a legless leyless lined  map where these places with capital letters are so I can avoid them.  No floaters. Can’t wait until next week.

This is the first episode of a four-part drama. I won’t be watching the other three episodes. I know the formula – a thrill at every advert break. So like Coronation Street or Emmerdale or whatever soap you watch something big is going to leave you wanting more than your cuppa and something small is left hanging during advert breaks to bring you back with a Kit Kat. Labelling theory contends that what people say you are, you end up ingesting that message and  being. If teenager Sam (Jack Rowan), a model school kid who thwarts bullies bullying another kid on the school bus and spends his time in the hospital reading to old codgers in the geriatric wing and telling them jokes, he’s obviously up to no good because he’s born to kill. Nature or nurture? Well, his mum who is also a nurse on a geriatric ward, Jenny, (Romola Garia) thinks he’s a good kid. Most mums do. Some scenes hint at a kind of incestuous relationship, but that may be how Sam is reading it, because he’s a psychopath. He’s born to kill. Empathy is not something psychopaths do, but they can learn to mimic being human, in the same way that the moron’s moron, Donald Trump can mimic being a President by blowing up the world. Born to kill. Jenny has the dim, dark secret beloved of thrillers and it’s not very secret, her ex-partner is also a psychopath, but he’s liable to come calling…advert time. Then there’s Chrissy (Lara Peake), the new girl at the school. She is grungy, not born to kill, but is an arsonist. She sets fire to the science lab, probably because she was bored and making a statement about moving house, going to a new school and teenage angst. . That’s the kind of friends psychopaths hang about with. Like attracts like. Jenny ends up getting detention for trying to burn the school down. As does Sam, who’s mum thinks he’s really a good kid, because he tries to take the rap for Jenny’s misdemeanours. Jenny’s dad, Bill (Daniel Mays) is a cop, a detective sergeant, so he knows if her arson attack had killed a classroom of kids, she was liable to get detention and lines, having to copy on the blackboard a million times ‘I must not kill my classmates or I’m a psychopathic killer like Sam, but it’s not my fault. I’m stroppy and misunderstood. An amateur. He’s the psycho’. Phew. I’m even tired after that. A bit of times tables tells us one psycho multiplied by another psycho, for example, Ian Brady and Myra Hindley, Fred and Rosemary West, means a whole lot of trouble and more detention time.

You know how it goes, Born to Kill is a modern psychological drama starred a new and upcoming actor…must see…not for me.