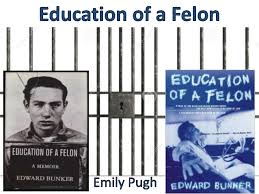 There is a moment at the end of the 1960s when race war is engulfing and burning America and the ‘chickens have come to roost’ in prisons, when Bunker is taking from his cell block in San Quentin to visit a parole officer. The parole officer laughs. Bunker’s file is the biggest he’s ever seen, the size of a phone book. He stops laughing when he reads the note attached, see File 2.

This is File 1 and 2, not written by the state, not written by those with an agenda. This is a book written by a writer, a great writer, telling you how it is. Take it or leave it. He usually took it and left what he didn’t want. That’s what got him into so much bother. Walking among 4000  prisoners in San Quentin’s yard he reflects on the eighteen years, most of his life, he’d spent in America’s children’s homes, toughest prisons and psychiatric institutions. The former differs from the latter in that the cure ensures vegetation of the mind and, like James Bond, has a license to kill – to cure. Bunker by this time is dealer inside, a kingpin pal trafficking drugs on the outside sending him an ounce of heroin a month. He explains the power that gave him.

A gram of heroin, a tiny fraction of an ounce, would, for example, easily purchase a murder from many takers. When someone wanted to know, who had heroin, they asked, “Who’s God today?”

Bunker earned his place as God. ‘Over the years I had assumed an attitude that mixed John Wayne with Machiavelli.’

But even God has to come down to earth and wants something better for himself. Bunker, a voracious reader, and an IQ of 154, wanted to be a writer. He’d written six books and sent them out for publication. Rejected. Let me put that into perspective. In 1970 less than one-percent of engineers in the United States were black. His chances were slimmer than that. Bunker, no fool, realized, ‘Without a miracle I would return to crime.’ Bunker becomes the exception to the rule with the publication of his manuscript No Beast So Fierce. ‘I had no idea if it was any good,’ he admits.

But a man needs more than one miracle to live. Look back at the message on the book, written from a sixty-five year old writer and actor to his five-year old son. ‘This one’s for my son. I’ve waited many years so I could deal him a better hand than I had. I’m sure he’ll play his cards better than I played mine. e.b.’

I laughed at one prison psychologist’s assessment of Bunker’s writing as ‘a manifestation of infantile fantasy.’  That’s a convoluted truth any would-be writer, including myself, would fully embrace. Write what you know and the truth will set you free. Not always, but sometimes you meet someone on the page that understands what makes us human.

I’ll end not with Edward Bunker, but with another writer, a middle-class woman writer, who sheltered behind anonymity, Elena Ferrante, ‘often between the poor areas and the rich areas there are distances that can’t be crossed…If the poor spill over, washing up against the border of prosperity, the wealthy get frightened and turn violent.’

We live in violent times, especially with the election of a moron’s moron as American President. Edward Bunker from his odyssey from the hungry thirties to a bit part as Mr Blue in Quentin Tarantino’s Reservoir Dogs, which features as the cover image of Education of a Felon, playing a villain, understands that best of all.  We have an American president playing the role of being human. No Beast So Fierce.  Every educationalist, and non-educationalist, should read this book.