Wow, Mary Whitehouse, this was a sizzler. To think back in the 1970s I used to get red faced watching The Sweeney, when they showed a bit of tit. This would have been a swift case of spontaneous combustion and my charred remains found glued to the false leather settee. Whoopee, finally, a blue movie on the telly, but I’m too old for it now!

But if you cut away the nudity, which I gawped at and enjoyed being a voyeur for a few hours, this was a tremendous film. Honest in a way I recognise in the best writing and could—honestly—say that could have happened. Emma ( Léa Seydoux) is a fifteen-year old Parisian schoolgirl who likes books and reading (Jane Austen’s Emma, like many of her protagonists is in love with the idea of being in love). Our first glimpses of her are in the classroom, discussing—you’ve guessed it, love at first sight—and there’s a play on this theme. Thomas (Jérémie Laheurte) fancies Adèle and her girlish friends are soon letting her know, hinting that the senior schoolboy isn’t Brad Pitt, but isn’t bad and he’d be good in bed. Emma is part of the queen-bee school set, a French Mean Girls, with sex and more sex a constant topic. Emma’s unsure, but she plays along. She agrees to date Thomas. But her head is literally turned when she sees Adèle (Adèle Exarchopoulos) a young woman with eye-catching blue hair in the street, with her arm flung around another young woman. They are obviously lovers. Emma’s and Adèle’s eyes briefly meet. Love at first sight, definitely, maybe.

When Emma masturbates in her bedroom it’s not Thomas she fantasises about, but the girl with blue hair. She does have sex with Thomas, but that soon fizzles out.

One of her girlish school friends teases her with a kiss, but when Emma follows it up, wanting more, she’s shunned as a dyke. But her best friend at school, Valentin (Sandor Funtek) is gay (that old trope of Hollywood movies) and takes her to a gay nightclub. Emma wanders away to another club, following a gaggle of women into a place that is a lesbian-hang out. Here’s where the meet-cute takes place.

The law of the meet-cute is nothing happens, but everything happens. Camera work tries not to beautify but make Emma uglier and therefore more human, emphasising her teeth or the way she plays with her hair. It works by not working. She’s a stunner. Adèle isn’t as pretty, but has a girlfriend in tow. She pays for Emma’s drink at the bar, and tells her girlfriends that they are cousins. She knows she’s underage, but gets her phone number.

She appears outside Emma’s school and Emma gets into a fist-fight when her school-girl friends hassle her about being a dyke. She denies it.

Adèle is a fine art student on the cusp of graduation. They hold hands, but Emma wants more, needs more, and when they kiss for that first time you know she’s going to get it. Boy does she. Only it’s not boys, it’s girls. The camera doesn’t miss a trick.

We play a game of meet the parents.  Adèle’s parents are solid middle-class, unfazed about sex and their daughter and step-daughter, respectively, having a girlfriend and not a boyfriend. Emma said she hates seafood, Adèle says something like shellfish tastes like pussy, so she loves it. Anyone for oysters?

Emma’s mum serves bolognese. She is grateful for all the tutoring Adèle is doing to help her daughter’s grades improve. Her dad asks Adèle about what kind of jobs she can expect to do when she finished swanning about with a fine-arts degree and what her boyfriend does. Adèle plays along and tells him, her boyfriend is a businessman, and she doesn’t know what she’ll do after graduation.

Emma, beautiful, nude, Emma is Adèle muse for her graduation and her up-and-coming exhibition. By this time they’re living together. While Emma does the grunt-work of keeping the house running and doing the dishes and at the end of the night, wants a kiss, a real kiss, Adèle turns away.

Emma is also working in school, training to be a schoolteacher. One of her male colleagues obviously fancies the pants off her. You know when she goes along to one of the teacher’s night’s out, well, you know. But it’s off camera.

Adèle finds out and they split. It’s messy because it’s no longer about sex, but love. Emma is eminently loveable, but she admits to having fucked up. We root for her. We want her to succeed. But you know, Adèle, older, wiser, we want her to bend a little. That’s how much of a good movies this is. We want characters on a screen to be more unlike characters on a screen, or in real life, because we’re not really sure. 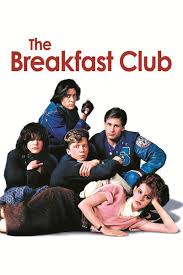 It’s been thirty years since I watched The Breakfast Club. I truanted from real life and took a step back into Shermar High school where it’s always Saturday detention in 1984. The Simple Minds hold play with a number one both sides of the Atlantic, Don’t You Forget About Me?  The only thing I could remember about the original was Molly Ringwald and one of the other detainees admitted they didn’t need to be in detention but they’d nowhere else to go. That was Ally Sheedy.

There’s no point in telling you the characters’ names or who they portray. It’s more like archetypes. Molly Ringwald is the beauty, with luscious lips like pumped up pears and more teeth than a shark. And she’s a ginger, but she is young, perhaps the youngest of the Bratpack. (For example, Demi Moore another member of the Bratpack, but she is not in this film, is more of a conventional beauty and a lot prettier.) But back then I’d hair. Everybody had hair. They probably had to have an extra hairdresser for every young budding star. Ally Sheedy is the bag lady, to Molly Ringwald’s queen bee, of those serving time in school detention. Ally’s hair is mushy and brushed down over her face. Molly’s hair is shiny as copper coins. They’re as far apart as Alaska to Easter Island. But after they do a bit of bonding the brains of the bunch, Anthony Michael Hall, asks if we’ll still be buddies on Monday, when school goes back. Molly strikes him down, puts him right. Of course they won’t. How could they be? But then we get the classic cliché of transformations and school maggot turning into a butterfly. Usually, the girl is transformed by taking off her specs and putting her hair up. Ally doesn’t wear specs, because the conventional film formula is only geeks like Anthony wear them. But Molly shows her how to be a woman. She does Ally’s hair, puts a little blusher on and does her eyes. Voila, the unveiling.

She doesn’t look that much different to me, but eyestrain and specs have taken the slack in life. The guys on set are keyed to say, whoa, we never knew she was so hot. Sporty, Emilio Estevez, gets her in a strangle hold and kisses her so passionately her hair straightens. Who can blame him? She’d got nice hair and that hairband does wonders for a bag lady.

The big and bad true romance is between beauty and the beast. Judd Nelson has the longest hair. He’s a rebel with a criminal past. In his locker he’s got dope. Just don’t look at the finger glove he wears.  After one squiff, one sniff of dope, and the music is on full blast, Sporty does a few star-jumps to show how athletic he is, Brains dons a pair of sunglasses and shakes his head like Stevie Wonder and Ally beetles about making strange squeaking noise. I didn’t think the music then was that great either. I can’t remember what the criminal mastermind does. I guess the camera spent much of the time on the beauty bopping about like a person with only one hip that kept knocking her sideways. You know the criminal and the beauty are going to hit off each other and fall into a conventional relationship. He’s shown her his flick-knife and he’s seen her knickers (white and clean, or so it seemed, I looked discretely away, of course). For god’s sake she even said ‘I hate you!’ It couldn’t be more obvious if she’d a big love heart tattooed to her forehead.

Start with I hate you and work your way to I love you, but Mr and Mrs I didn’t really understand the real you. The connecting thread is Phil Larkin, This be Verse. ‘They fuck you up, your mum and dad./They may not mean to, but they do./ They fill you with the faults they had. And add some extra, just for you’. All of the detainees in their own way admit this truth to one another. They are more the same than different. Judd the criminal brains does a cameo of the academic brain’s sparkling home life, with his dad and mum asking him if he wants to go fishing and compares it with his own. Brains big secret is he’d a gun in his locker. Nothing much in America really changes. Every kid seems to have a gun in his locker. It’s an American right. I enjoyed this. But I won’t be looking back again – not for another thirty years. By that time I’ll be so old I’ll forget what I’m not looking at. Oh yeh, Molly Ringwald.