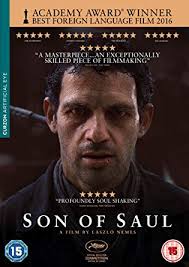 This is a straightforward narrative. A Hungarian man finds the body of a young boy, he thinks is his son and he wants to give him a proper Jewish burial. To do so he needs to find a Rabbi willing to perform Mourner’s Kaddish.

Transpose that scene to an unnamed Nazi death camp, (Auschwitz), running at full capacity, murdering Jews and burning their bodies. Fling in the babble of languages – German, Hungarian, Yiddish, Russian, Polish, French, Greek, Slovak and Hebrew – and make your central character, Saul Auslander (Géza Röhrig) a Jewish Sonderkommdo. There’s a red X on the back of his coat and his job, as is the job of all survivors is to live as long as possible. He’s an old hand at it. Burying the young boy endangers not only him, but everyone around him. Scroll back.

Redemption comes when a miracle happens. A shipment of Jews are herded into the shower-room.  We hear the banging and shrieking as those inside try to escape from Zyklon- B gas. Sonderkommandos wait until ‘the pieces’ are dispatched, until they can get to work cleaning up. Pieces, are, of course, bodies. Saul’s job was, literally, picking up the pieces. And one of the pieces he picks up is his son, who is still alive, but dies later.

Nothing was wasted in the death camps, teeth extracted for gold, hair and even skin used for lamps. Eighty-percent of those arriving were processed immediately and send to the gas chambers. For some trainloads it was one-hundred percent and the ovens couldn’t cope.  Clothes recycled and the hunt for jewellery, gold and currency went on. ‘Canada’ was a place in camp where much of this reprocessing happened.

Euphemisms abounded and the film gets much of it right. While they can show the cruelty that was an integral part of the Nazi genocide, what they cannot show is how a body disintegrates without food and how crowded the camps were. They cannot replicate the stench of burning bodies. What they do well is show how many camps were situated in areas of natural beauty. Prisoners are shown shovelling ash (from bodies) into the nearby lake.

Son of Saul depicts, and indeed educates us, around the existential issue of what it means to be a man or a woman, what it means to be human, while giving no set answer. What it cannot do is legislate for stupidity and the cultivation of ignorance. A poll taken before Holocaust Memorial day on Sunday found that said the one in twenty Britons, say the Holocaust never happened. And eight- percent say the scale of the Holocaust has been exaggerated.

The surprising thing about that poll is it doesn’t surprise me. The only exaggeration is how stupid these people are. But with the moron’s moron in the White House and the growth of right-wing neo-Nazi parties across the world, even in Germany, I don’t know whether you should watch this film or weep or look at the poll and weep. I tend towards the latter.