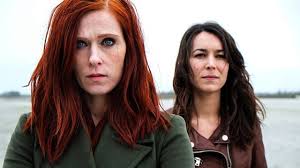 I love Wallender and I’m a big fan of The Killing, wouldn’t say no to A Bridge or two, in fact, put subtitles on it and stick it on BBC 4 and there’s a more than fair chance I’ll be watching. The eight episodes of A Frozen Death will take us up to Christmas. Time to clean out that freezer and make way for fifteen dead bodies found frozen like turkey-wings on a bus that leads nowhere. That’s the kind of mystery that gets any detective chewing over the facts. This is France, the home of Zola and Rimbaud, so we don’t have a motive but a motif. It’s scrawled on the bus-stop wall. ‘Crazy mothers drop their children/who smash their skulls. ’

Easy-peasy, you might say, anybody that likes turkey wings in Paris the capital of French cuisine is a nutter and must be stopped.  This job falls to Sandra Winckler (Marie Dompnier). Her fatal flaw isn’t bevvying, she’s French, and likes the odd glass of wine, or even smoking, that’s allowed as long as it chic and she can carry it off. She does. She’s pretty impressive. Her fatal flaw is she has children. Let’s face it. Kids get in the way when you’re trying to solve the mystery of 150 frozen fingers. Her eldest Chloe (Nina Simonpoli-Barthelemy) is twelve and drips disdain and treats her mother as some kind of bag-lady, as all kids do, but made worse by mama always nipping out for another dead body to work on. There’s a subplot that Chloe wants to go and live with papa, who’s downsized to someone younger, but not prettier than mama. Sandra’s youngest, I don’t know her name, let’s call her baby, is a problem easily solved. Sandra just takes her in the car seat to scenes of crimes. There must be a law against that. Specifications for what size of baby to take to what crime scene are stringent in this county, but over the other side of the Channel it doesn’t matter. The baby’s pretty cool about it and will, no doubt, be a top detective when she grows up into mama’s petite feet.

What baby has to watch out for is not sleeping on the job, but amnesia. There’s an epidemic of it about. I Know Who You Are is a series based on the fact that no you don’t. Here Catherine Keemer (Audrey Fleurot) has been brought out of the deep freeze, where she’s been held for three years, like the victims on the bus, but she can’t find a thing. And conveniently seems to have lost her baby. She gave birth when in captivity. All the victims on the bus seem to be her former lovers. But she has amnesia and forgotten what she did with her life and her handbag. Roll on Christmas with all those weird delights like a guy that kidnaps women, and stages mock marriages with his victims, and makes their former partners watch the ceremony while being sloshed enough with non-prescription drugs not to care. Amen to that.