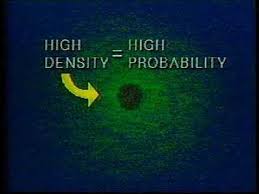 In medieval philosophy an element was thought of as something fundamental that couldn’t be broken further down into anything else. Look at the periodic table. Superimpose on it these building blocks of space and time. Ephemera comes from the Greek and the narrative is linked to a plant the ancients thought lasted only for a day. Elementary particles exist for a much shorter time than that – a fraction of a fraction of a fraction of a fraction of a second. Like quanta in an electromagnetic field they do not have a pebble-like reality and their effect can only be measured in terms of probability. CERN’s Large Hadron Collider in Geneva for example is a loop designed to smash subatomic particles together at increasing speeds. We already knew that elementary particles such as neutrinos existed and swarm throughout the universe, but have little interaction with us, but CERN was able to confirm the existence of the more elusive ‘Higgs bosons’.

This makes it sound like the straightforward world we are used to that of cause and effect. But quantum mechanics has its own laws, which are not laws, but more like whispered suggestions. From the early 1950s to the 1970s physicists such as Richard Feynman and Murray Gell-Mann suggested a set of commonalities and parameters that could be used to experiment with elementary particles called ‘the Standard Model of elementary particles’.  The Higgs Bosons (named after the Scottish physicist Professor Higgs) for example was a thought experiment using quantum mechanics before its existence was confirmed by CERN.

Despite the Standard Model’s success, or perhaps because of its success, it has attracted criticism. It lacks the austere beauty of Einstein’s equations. In comparison it is cobbled together with piecemeal and patched theories without any clear order; an uncertain number of fields; interacting between themselves within certain and uncertain forces; determined by certain constants whose values are unclear; but show a certain (unknown) symmetrical pattern and stirred with a big wooden spoon called the Standard Model.

The Standard Model’s predictions about the unobserved world do work in describing the world as the Higgs Boson shows but it also leads to nonsensical predictions which have to be ignored or counterbalanced; a procedure called ‘renormalisation’.  Paul Dirac, the great architect of quantum mechanics, whom Rovelli places second only to Einstein in the pantheon of twentieth century scientists, concluded ‘we have not yet solved the problem’ of quantum theory.

Quantum theory has more recently been unable to account for what has been termed ‘dark matter’, a large cloud of material observed by astronomers whose gravitation pull deflects light in distant galaxies. Quantum theory is itself in flux, as it always has been.