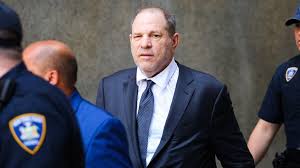 I watched this with interest. For those of you that don’t know the story, Bob and Harvey Weinstein came from rags to riches, rent-controlled housing, worked hard and lived the American dream. They created a media monster, Miramax, named after their mum and dad, which was gobbled up by an even bigger player, Disney. And they went on to live happily ever after in La La land.

Harvey never really had any friends. What he had a genius for was bullying and marketing. Deterrence did not deter him. No doesn’t mean no.

Paz de la Huerta, ‘You put on a happy face, but inside your dying. I wanted to take back what he stole from me.’

Hope d’Amore, ‘Nobody would have believed anything I said. He used to say he owned the cops in Buffalo.’

Journalist Andrew Goldman was a minor causality when he was put into a headlock and punched in the head by Harvey Weinstein. His girlfriend got a quote that sums up Weinstein (and Donald J Trump). ‘I’m glad I’m the sheriff of this shit ass fucking town’. Partygoers took plenty of pictures of this altercation, but none emerged to support the reporter’s claims.

Untouchable, appeasement is not just between nations but begins at home and is a come-on for the bully boy.  Wars break out not because a country becomes reckless. Countries go to war because they continue to do what they’ve always done. Weinstein’s brute strength wasn’t in his obese frame overwhelming a hundred pounds of female flesh, but in the economic strength he projected.

We know the story of how he worked. Like Michael Jackson it’s told here again and again. Pattern recognition: An invitation of a lift home. The offer of a part in movies. The sore neck that needed massaged. The locked door. The penetration. It wasn’t a secret. It wasn’t a lie. People knew, but most weren’t talking.

One of his victims summed it up by saying she was a nothing, he was a ten. But Weinstein was no longer a ten when he voluntarily placed himself in custody. He was no longer, like the pussy-grabber and moron’s moron in the Whitehouse, king of the hill. Disney had let Miramax go, and after spectacular early success, Bob and Harvey had blown $1.2 billion of other people’s money on film flops. They were vulnerable. Harvey was especially vulnerable. Sure they still had millions of dollars to throw around intimidating victim with smear campaigns, litigation and phone calls in the middle of the night, but he was no longer ‘the sheriff’, in the way that the moron’s moron is still President.

Those of us that stood around whistling and waiting with foreboding for the latter’s impeachment are gloomy. The floppy haired grabbers just keep going on grabbing to fill their oversized egos. Women are fair game, the weaker sex.

Benito Mussolini and his fascist troops occupied Ethiopia and a bit of France. There’s a sense of national histrionics and entitlement recognisable in that other caricature of humanity this side of the Atlantic in Boris Johnston. No ideology but self. The strong man. No coherent plan. Waiting to see what way the wind blows and humanity be damned. Women be fucked.

Weinstein is the lesser monster of our imagination. One that is behind bars is never that threatening. If he was up for re-election, we’d have something to fear. Stupidity is contagious, appeasement continues and it’s not too early to say the future of the world is at stake. If I’m still alive in ten years I hope and pray there’s an outbreak of common sense and a documentary about the women the moron’s moron has raped and his ever-growing, multiple, abuses of power. Trump’s still at ten in his power base, eleven even. Few sitting Presidents up for re-election lose. We need to wait for the fall.  Weinstein be damned. Weinstein is history.