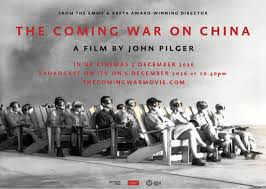 The title is deliberately provocative. Does John Pilger mean trade war between the number one and two trading blocks in the world? Because we know that is already happening. President-elect Donald J Trump in his campaign –among other accusations – accused China of raping America and stealing job and the American economy was ‘hurt very badly by China with devaluation.’ The United States and Canada are vital to the Chinese economy. The former dependent on the cheap money China provides to service its debts. Equally, America and the rest of the world are depended on the cheap imports that Chinese labours provide. Think Apple here. Australia’s economy is premised on exporting the raw materials necessary to keep the Chinese economy growing. Britain and America’s  metaphoric economy report cards, for example, are marked as successful if GDP growth has been reaching one-percent, or if it hits the dizzy heights of two-percent GDP growth. China, in contrast, recently hit growth rates exceeding ten-percent of GDP, but this has slowed in recent years to around five-percent and falling to levels associated with more mature economies.

It’s worth quoting Lijia Zhang, a Beijing journalist. Her best-selling book (although obviously not in America) is called Socialism Is Great! She was a child of the Cultural Revolution, when millions of Chinese died of hunger and has lived in the US and Europe. ‘Many Americans imagine that Chinese people live a miserable, repressed life with no freedom whatsoever. The [idea of] the yellow peril has never left them… They have no idea there are some 500 million people being lifted out of poverty, and some would say it’s 600 million.’

China stands now where America stood before the start of the First World War. The world’s axis is shifting East, not only to China, but to countries like India, which between them account for over half the population of the planet. It’s the end of empire for America. And like the British before them if it comes to deploying gunboats as the British did during the opium wars and the Boxer Rebellion, then Pilger notes the American’s are doing the same with over 400 naval bases world-wide, including one a few miles from me in Faslane, but most of them pointing East and costing trillions of dollars. The irony here James Bradley notes:  ‘Warren Delano, the grandfather of Franklin Delano Roosevelt, was the American opium king of China; he was the biggest American opium dealer, second only to the British. Much of the east coast [establishment] of the United States – Columbia, Harvard, Yale, Princeton – was born of drug money.’

America wants to be allowed to be more protectionists that China and China to be more free market than America. The irony here is the Hurun Reports conclusions there are more dollar billionaires in China than anywhere else in the world, including America. But as Eric Li concludes you can be a billionaire in China, but still not be able to buy the Chinese politburo. Pilger’s programme was made before the election of billionaire president Donald J Trump and whose senior positions have been filled so far with a number of billionaires, three Goldman Sachs bankers, and the chief executive of the largest oil company in the world, who has close ties with Russia. It makes George W Bush’s first cabinet of millionaires pauperish.    ‘I believe in American exceptionalism with every fibre of my being,’ said President Barack Obama.  President-elect Trump has already made that exceptionalism clear with his appointment of retired marine general James ‘Mad Dog’ Mattis as defense secretary. Accused China of interfering with a missing US drone and angering China’s leaders by taking a call from Taiwan’s president – an island that China regards as its sovereign territory.

The difference now is it’s nuclear. Pilger takes us through the stages of and testing of America’s nuclear capability. The Bikini Atoll was repeatedly blown up with the cost estimated in millions of dollars a day. But the real cost was to the islanders used as human guniea pigs in experiments into radioactivity that would have shamed Dr Mengele because the latter only tortured subjects in front of him and not the children’s children of their children as US scientists repeatedly did and continue to do. Poor nations dependence on the US dollar was highlighted by a tale of rich and poor. The Ronald Reagan Ballistic  Missle Defense Site (of course it’s defense) on the Marshall Islands spends billions of tax dollars and year, and millions of dollars a day. The island nearest this paradise ( a swimming pool away) cannot afford to fix the town’s only bus. But perhaps the most chilling moment in Pilger’s documentary was when a former soldier admitted that during the Cuban Missile Crisis a rogue officer ordered those under his command to fire the missiles, and opening the silo doors, which would have wiped out China and the world. For twenty seconds in 1961 the world stood on Armageddon, before the order to stand down was made and the officer quietly escorted away to La-La land.

Pilger does not touch on American’s forgotten war, the Korean war, when Chinese forces near Yalu in early 1950s caught General Douglas MacArthur and his soldiers by surprise (see David Halberstam, The Coldest Winter. America and the Korean War).  America was sick of war, as was the world. The answer was to go nuclear. But even then scientist recognised that would mean the end of the world. The Coldest Winter is, of course, nuclear winter.  Now with ‘smaller’ nuclear weapons and hawks in the cabinet, every war looks winnable, but only by striking first. We’ve given Dr Strangelove Trump the codes to our planet’s future.

Here it’s worth quoting an exchange with Pilger and Professor Ted Postol was scientific adviser to the head of US naval operations. An authority on nuclear weapons. Remember this is pre-Trump and pre the term ‘posttruth’ gaining entry to the Oxford English dictionary: “Everybody here wants to look like they’re tough. See I got to be tough… I’m not afraid of doing anything military, I’m not afraid of threatening; I’m a hairy-chested gorilla. And we have gotten into a state, the United States has gotten into a situation where there’s a lot of sabre-rattling, and it’s really being orchestrated from the top.”

I said, “This seems incredibly dangerous.”

“That is an understatement,” he replied.