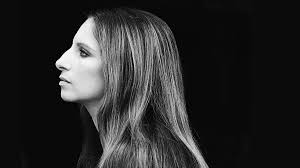 Barbra Streisand is a bit like the Rorschach-ink-blot test. Ugly or beautiful? Well, my sister, Jo, used to get told she looked like Barbra Streisand. In other words, she had a big hooter. This was the consolation prize you didn’t want to win. Streisand redefined what it meant to be beautiful. If you listen to her feminist fan Camille Paglia not only did she do that but redefined what it meant to be a woman, an outsider and all that jazz. The trouble with this is all the Barbie notions of femininity she so despises, blond hair, Farrah Fawcett features are pretty much my mindset of what female beauty looks like. What no one can argue about is Barbra Streisand had a voice like no other.

If we start at the beginning, she was born in Brooklyn and her dad died when she was a few months old and her mother didn’t really thing much of her daughter. Barbra (she took the a out of her name later) was so thin and anaemic her mum didn’t think she should take ballet lessons. She took ballet lessons. Her mum thought Barbra should go to college. She was a straight-A student. Barbra didn’t have time for college, she’d wanted to be a star since she was four of five and the first step was getting out of Brooklyn and crossing the bridge to the bright lights of Broadway, or thereabouts.  I know it’s kind of daft, but I never thought about Streisand as being Jewish, even though the clues are all there for anybody that wants to look.

She was sixteen when she took acting lessons with Alan Miller, who became her acting mentor. Such was her dedication she took all his classes and followed him home on the bus and continually asked questions. She took a Socratic view of the world. And this continued throughout her career, where at every step she took charge of her destiny. She explained later in the programme that she’d be described as a perfectionist. And I’m sure she was, but she declared herself to ‘strive for excellence’ which was a lesser beast, which allowed compromise, but not with the ‘narrow-minded’ which is the kind of thing a perfectionist would say.

The funny thing about funny girl is no one took her seriously. She went for auditions some marked her talented but ugly, which was much the same thing. No acting roles. The mighty Lee Strasberg who gave us the iconic Marlon Brando, described Streisand as talentless and annoying. Her endless questions didn’t suit his style of learning. I guess he thought her ugly too. Everybody else did.

Sixteen to eighteen, here’s one of those crazy things, 1960-61,  she asks Barry, one of her actor friends, if she could use his Ambex recording equipment and he agrees, even though he doesn’t know if she can sing. He talks about ‘cold shivers’ when he heard her. Yeh, voice of an angel. Her father had been a cantor in Russia and her mother Streisand said was a great singer.

Her voice, not her looks or acting talent is her passport to every kind of critical and successful awards Broadway and Hollywood can fling at her. She’s a world movie star with number one hits and a massive fan base. She directs and produces her own movies. Yentl based on a short story by Issac Bashevis Singer is a showcase of her talent and leverage. Streisand writes the screenplay (with help from Jack Rosenthal, but her name comes first and foremost). She directs the movie. She raises the money for the movie and is the producer. She stars in the movie. It’s her baby and it won awards and made money.  Her voice is amazing, but really, the film is shit.

Streisand, of course, like any icon leaves the past behind and recreates herself. If I remember rightly she had a later affair with Andre Agassi, when he could play tennis and she kept Michael Jackson on speed-dial. Icons do that sort of thing. Her first husband Eliot Gould when he divorced her said he thought she’d come back to him. Icons don’t look back, they’re always looking forward. The next big thing.  Streisand is a real star, but Yentl, get real. If I wasn’t already bald I’d be pulling my hair out. Beauty is in the eye of the moneyholder.

I spent three and a half hours with Marlon Brando, which is quite a long time for an old buddie like me without falling asleep, especially on a Saturday night, when there’s football on, and I’ve not got a beer in my hand, but I don’t feel that it was time wasted.

I’ve watched On the Waterfront before. Don’t ask me when, or what it’s about, that’s a bit like asking me if I’ve read a book, and I say yeh, and then can perhaps pick out some detail that has sellotaped two neurons together with sufficient force to constitute working memory. In this case, it’s Terry Malloy (Marlon Brando) telling his brother ‘I could have been a contender.’ There’s universality about that line that sticks, an everyman truth that if we did the right thing and stuck at it, we’d get our just rewards. It’s a morality play and the American Dream, writ large on Malloy’s face and nothing and no one is going to stop us.

The film is black and white, but that’s not what makes it dated. Johnny Friendly (Lee J Cobb) is mobster that runs the docks and what he says goes and without him no ship gets unloaded. He’s corrupt because unions are corrupt and, with kickbacks, stop people from working for a fair’s day pay. Yankee Doodle I say to that, because I remember mobsters, I even remember unions, but this notion of a fair day’s pay that really was an 1950’s invention. Offshore tax free havens for money laundering such as the British Virgin Isles, Jersey or London hadn’t even been invented. All right then, London had been invented.  Shoreman lining up for a job, if their face fitted, they got a job, if it didn’t they never. No change there, as far as I can see. I ask myself who the villains would be now? Ask yourself that question too.

Then there’s the question of loyalty and ratting on your friends. Johnny Friendly tells Terry to go and spy on those that want to do things differently, the disgruntled masses that don’t want to pay kickbacks to workshy loafers in their chapel that give nothing back but take everything. Strangely familiar too. That’s not ratting, or grassing, because you’re really for us or against us, and these people are different. That was a theme Ella Kazan was all too familiar with. In Arthur Miller’s marvellous autobiography Timebends he tells how Kazan was asked to appear before the Hoover inspired witchhunt House of UnAmerican Activities to talk about his friends, associates and work colleagues. Someone like B-part player, Ronnie Reagan was delighted to do so. As did Kazan. Miller, his former friend and associate, didn’t. Kazan’s knowledge about ratting and stool pigeons came first hand.  (http://www.writing.upenn.edu/~afilreis/50s/navasky-chap7.html)

I get it, I really do, and Marlon Brando, the youngest actor to receive an Oscar for best actor got it too. Hollywood was open for business and Marlon Brando was the new star and the bright young thing that offered something different from traditional male leads. He was lucky. ‘I arrived in New York with the clothes on my back,’ Brando tells the listener. ‘Luck Be A Lady Tonight,’ Guys and Dolls. Brando was hot as Sarah Palin in snow boots. Watch him being interviewed by two young and attractive presenters. It makes your toes curl with embarrassment. But a magazine cover asked ‘Could there have been an Elvis without Brando?’ Another way of putting this is could there have been a John F Kennedy without Brando? JFK didn’t even like wearing hats, that’s how hip the first Catholic president was.

Brando sought a new self, away from the razzmatazz of Hollywood in Haiti. There wasn’t just a Mutiny on the Bounty. He found that the old self didn’t go home. The old self was home. ‘Give me the boy and I’ll give you the man,’ is the Jesuit epigram in Apsted’s 7-UP series.  Luck isn’t always a Lady. A son that kills his half-sister’s boyfriend and is convicted of manslaughter and his daughter that commits suicide.

Brando’s life becomes what he says he most hates – a soap opera. If he didn’t become an actor he claims he would have made a good conman. The world’s greatest actor. Imagine how he felt having to audition for roles such as that in The Godfather. That’s like Muhammad Ali, being called Cassius Clay, and  having to audition for the boxing ring. Then I realized that Ali did have to, when he came out of prison. Brando supported King and the black right’s movement. He was an activist for social justice. It wouldn’t be hard to imagine what he thought of Donald J Trump.

Actors come and go. Brando’s tapes include him boasting about being paid $14 million for twelve days work on Superman. Then, there’s Macbeth’s soliloquy, all actors seem to have it in their portfolio, even the best actor in the world but if you want to hear the real thing then listen to Anthony Hopkins sending up his Shakespearean friends on Parkinson, most notably that other best actor in the world Laurence Olivier. Even the mad Conrad’s Kurtz, in Apocalypse Now would recognise the sentiments.

Tomorrow, and tomorrow, and tomorrow,
Creeps in this petty pace from day to day
To the last syllable of recorded time,
And all our yesterdays have lighted fools
The way to dusty death. Out, out, brief candle!
Life’s but a walking shadow, a poor player
That struts and frets his hour upon the stage
And then is heard no more: it is a tale
Told by an idiot, full of sound and fury,
Signifying nothing.