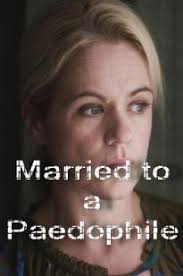 Married to a Paedophile was, ironically, on at the same time as another outstanding piece of drama, Mother’s Day. The latter is conventional drama in that we start with tragedy and end in triumph – The Good Friday Agreement. The argument is implicit, cause and effect. Married to a Paedophile is more of a Greek tragedy in which, for example, solving a riddle Oedipus on the way to Thebes murders his father and sleeps with his mother.  There can be no triumphant note, even when the villain is punished, but there can be a better understanding.

One hundred people a day in Britain get that knock on the door, a police raid, computers and phones taken away. Downloading indecent images of children is one of the fastest growing crimes and it seems to be, as shown here, it is the middle-class men that are most often caught in the net.

The number prosecuted in no way reflects the actual numbers of paedophiles in our society. One German study (if I remember correctly and usually I don’t) indicated that one in ten men had paedophilic propensities.  The number in Japan… who knows? Manga pictures and child sex dolls sold as part of normal society. What we do know is the more dedicated resources our police were given to investigate crimes like this the more arrests they would make and our vastly overcrowded and chaotic prison system would be unable to cope. We hide from that truth.

Married to a Paedophile claims to be hybrid of fact and fiction in that actors ‘lip-sync’ people who get that knock on the door. A mockumentary or docudrama.

Plotting is as straight forward as in the drama Mother’s Day. We have the characterisation of a good paedophile, a senior school teacher, who is given the name Alex, who has two children, one at university and the other about to go to university. His wife Kate goes through the emotions of disbelief to acceptance that she never knew the man she had married and she shuns him. His children do not.

Alex’s daughters buy into the argument their father offers them that he was depressed and would never hurt them, what he did was wrong, but it was a kind of illness. To my ears it sound very like the arguments used by alcoholics. And I’ve heard it many times. Kate disagrees with her daughter about this. Alex had a choice, she argues. He wasn’t ill, he is a paedophile and she wants nothing to do with him or his ‘illnesses’.

The characterisation of the bad paedophile is Robert. Other people do his talking for him. Unlike Alex he never addresses the camera. He never explains. His wife Helen explains for him.  They have been married for 40 years and she is shown getting ready to go and meet him, making herself nice for him, when he’s realised from prison. She wants to protect him. But he can no longer live in the family home because of their grandchildren. His son’s wife in particular is antagonistic. She had breastfed her grandchildren in front of Robert and one of the images he collected, but claimed not to look at, was of a child being breastfed, taken from its mother and…well, you get the picture. You want to grind glass into Robert’s eyes. But here it is Helen you feel angry at, and in the end, feeling sorry for. Good drama does that.

And the dramatization of the good and bad paedophile does that, moves you. Well, worth watching, but let’s not buy into it being a documentary or there being any real policing of the net.