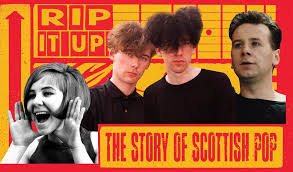 Rip it Up and Start Again. Rip it Up and Start Again. That’s the lyrics to an Orange Juice song.  I don’t know my contraltos from my tomatoes. Doesn’t matter.  I loved Rip it Up, three hours of nostalgia and the good old days that never existed. My favourites were KLF, the millionaires who burnt a million quid (alledgedly). I forgot how bonkers and how good they were. Watching clips of them made me laugh. I did quite well, in the quiz accompanying the series, which is equally bonkers, out of the five billion vinyl sales of records I bought three albums. Saturday Night Fever, Bat out of Hell and something else, but not with Pan Pipe music. Fuck off Pan Pipes and Fuck off with The Birdy Song.

The last episode ‘Success and Excess,’ was a bit out of my league, it was all about indy music and independent record labels, as a person that doesn’t listen to music and hardly listened to music when I was younger, I’d never heard of them. What it reminded me of was that old trope that anyone can write a book and get it published. There was that self-congratulatory feel from the falling faces of established stars. Guys and girls in their bedroom are going to make music and make it in the music industry.

That’s called the exception to the rule, rule. More commonly known as bullshit.

The first episode ‘Blazing a Trail’ had a more honest narrative appeal. In other words, I liked it. Lulu and Donovan. Nazareth, are a bit like The Jesus and Mary Chain to me, never heard their music but the names have that familiar ring. I’m more a Middle of the Road kinda guy. Here we find they were a precursor to Abba (I liked the blonde one).  And when you listen, it’s all there, under all that hair. Loved it. From the Skiffle of Lonnie Donniegan to the Bay City Rollers.

Now we’re hitting my childhood. My sister fancies Alan because he looked quite quiet. I can see her point. John von Neumann, I think it was who helped to develop Game Theory and had other side-lines in Dangerous Minds, suggested when you were trying to get aff with somebody don’t go for the A* lister, which in my time was Pauline Moriarity, go for the cast off, ugly duckling. Then you’ve got a chance. So logically, my sister fancied Alan because she’d no chance with Les. In the same way I didn’t fancy Farah Fawcett, but the ugly Charlie’s Angel because if we ever met, that was it. The Bay City Rollers sold over 100 million vinyl records. I bought zero. They ended up skint, but that wasn’t my fault. I didn’t get pocket money and if I did I bought a packet of caramels, which lasted longer.  So much for the big music industry.

‘Success and Excess’, the second programme featured that well know band from my neck of the woods, Wet, Wet, Wet. The Clydebank Group hit a virtuous circle, a number 1 hit tied in with the soundtrack of a successful film. That’s international success, and breaks the American market, right away. See Glaswegian  Jim Kerr, Simple Minds and that coming-of-age movie The Breakfast Club. For any band this is called the licence to print money club.

I was talking to my brother about this. Marty Pellow’s brother was called Kojak. That wasn’t his real name. We got into a fight when I was younger and he tried to steal my carry-oot. Nobody puts Baby in the Corner. Really? Yeh, I stole that line from Dirty Dancing, which was the complete opposite of what most of us were doing. Real disco dancing was a bit of awakward-larity elbow movement, looking at your feet and appearing as if you’d just shuffled out of a dark wardrobe and was hoping for a girl to give you directions, preferably a pretty girl. And nobody steals my carry-oot, even Marty Pellow’s brother. Right enough that’s not his real name either. He’s dead now. (RIP) The summer of 1976 was the hottest summer until now and well, when it’s pissing down these programmes take you right back to your childhood. Terrific TV.