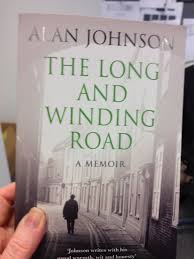 I’d like Alan Johnson to be Prime Minster. That seems outlandish as Jeremy Corbyn, but Johnson is not such a Daily- Hate- Mail figure. But he was Home Secretary under the Labour Government 2009-10, a position our current Prime Minster Teresa May held before becoming Tory leader. I guess at the end of polling today she’ll remain Prime Minister. I read an interview with Paul O’Grady on Sunday in which he wished the heads of David Cameron, and his sick sidekick, George Osborne should be placed on display on Tower Bridge. I’m not sure I’d add Teresa May to that list, but I could easily be persuaded. Cameron and Osborne poisoned debate and played to the Tory grandees by using stereotypes of working-class life taken from shows such as Jeremy Kyle to cut the welfare budget and keep cutting it with spurious claims that it was to bring the nation’s deficit down to zero. If black people were portrayed in this way it would be classified as a criminal offence. Inciting racism. The promise to cut the nation’s deficit has been quietly side-lined by May.

The Long and Winding Road at one point tells us how the Conservative Party stage manages its annual get together. That’s when they pick their victims. The usual line-up. Johnson managed to infiltrate the conference. There’s a cartoon Johnson, from The Times, May 1994, portrayed as dog, savaging the President of the Board of Trade, Michael Helseltine who had lined up the Post Office – Telecom, Royal Mail, Parcelforce and Post Office Counters – as the next public service to be privatised. All were in profit, but, of course, it wasn’t about that. It was about ideology. Privatisation is good because it makes rich people richer wasn’t one of their arguments, but you get the general drift. The buzz word is usually efficiency.

That’s two paragraphs and I’ve barely mentioned Johnson’s book. I found it a bit boring and got to page 111 and pulled the bookies slip I was using as a bookmark from the book. The chances of me reading on are slim. It’s Johnson’s third autobiography and there is repetition. He needs to bring those that have not read his first book up to speed. This Boy, which is by far his best, outlines what happens when his feckless father left his sainted mother Lily, and the family was left to fend for themselves in East London slums in the 1950s.  I started with his second book, Please, Mr Postman, and worked my way backwards to This Boy.  Alan Johnson has met his future wife, who works with his sister Linda, but already has a kid, but they settle down in Slough. He starts working for the Post Office, a postman, all childhood dreams of becoming a pop star, put out of his head, with as much overtime as he wanted, leaving little time for anything else.  By the time the reader gets to The Long and Winding Road we know where the story is going, but the narrative drifts into meeting people such as Tony Blair who are going to become famous and blokes we’ve never heard of, but are salt of the earth type. It gets cliched and boring. But that’s my opinion. You May think otherwise. I’m sure when I wake up tomorrow Teresa May will still be Prime Minster, but not my Prime Minster and she’ll write a book in later years about her Long and Winding Road. Yawn.