I took Ewan Gault’s novel with me to get my Covid booster and flu jab. An hour-and-half waiting. It’s a pocket-sized book with the print a bit too wee for my liking. But I got stuck in and read most of the short twenty-six chapters in one long wheeze. I kept a few of the pages back to enjoy the denouement when my mind was a little clearer.

Crime/Thriller category. Tartan Noir. Ian Rankin, who wrote William McIlvanney’s latest Laidlaw, knew better than most, the Glasgow detective didn’t solve crimes but solved the world. The setting, Port Cawdor, bypassed by an A-road. Train station closed by the Beeching cuts. The headland were everybody knows everybody else’s business, and it’s a crime to be young. Not that they need much help with the heroin problem in a wee fishing village making national headlines. We’re more in Alan Warner’s Morvern Caller and The Sopranos territory.

First lines. Any aspiring novelist or story writer is told it’s the first line that reels the reader in.  You need to feel it on your tongue that this is the story for you.

The morning I got out of my dead cousin’s bunk and went to the mirror. I still wasn’t used to being at sea and felt sick half the time.

Books ask questions of the reader. The obvious one here is how did his cousin die? Which has to do with plot.

The less obvious one is who is the narrator? Well, that’s simple and complicated, as it should be.

We’ve got both insider and outside accounts. By insider I mean first-person accounts, the story as told by ‘I’ seventeen-year-old Malky Campbell. Bildungsroman. When he gets off his uncle’s fishing boat he buys a bottle of vodka and Great Expectations. I could witter on about the symbolism between the child Pip and the convict Magwitch, but really, nobody gives a fuck.

Amid the Dickensian poverty of Port Cawdor is the dual income, Tory voting, affluence, of those that have had a leg up and made it. Characters such as Inspector Stark, his headmaster wife and Zoe, the head girl at the school. One of the ‘brainiacs’ destined for medical school and better things, which meant never having to return to Port Cawdor.

Inspector Stark as his name suggests, is not one of the chummy insiders at the local nick. He’s the outsider that knows he’s becoming a cliché, investigating the case of why and how Malky Campbell’s cousin, Joe, died on board his da’s fishing boat. We are no longer with the ‘I’ narrator, but third-person, distanced, but close enough to the action. His goal is clear, he’s not overly concerned with the local crime family, the Kerr’s, or the collateral damage they’ve caused, but wants to get Mr Big.

Junkie Josh sums up the gap (lines so good it was used twice):

‘We are the unprofitable bycatch of humanity. They’d like to throw us in the sea’.

Literary representation or merit. I’m often not sure what that means. But I’m jealous of how good some of the writing is.

I tried to catch the cleaning woman’s eye, she was standing sentry still…A shabby pigeon bobbled across her newly cleaned floor, drawing a wing over its face, like a person going to court trying to hide behind a blanket.

Plot: Although Zoe mirrors Nicky as the good girl/bad girl Malky could hook up with. Nicky’s shambolic and heroin addicted lifestyle means that they meet when they meet. Seems to me naturalistic (whatever that means).

Zoe meeting Malky in a petrol station off the A9, seems forced and unnaturalistic.

Secondary Characters: You don’t want them to be like the identikit Highland towns with shortbread and tartan that Malky hammers through with Zoe in the car. I can’t remember the name of the entertainer who explained that when the curtain goes up, his character had to be dressed a certain way, with shiny black shoes, and sound a certain way. In the next act, his character could be wearing carpet slippers and the audience wouldn’t notice. But the Council workers—Gav, Iggy, Pete and Frank—whose jobs I’m sure Ewan Gault is familiar with (as I am) seem much of a muchness. I couldn’t pick them apart.  But perhaps that’s my failing and not the author’s.

Port Cawdor lives, dive in deep. Ewan Gault has much to be proud of. Read on. 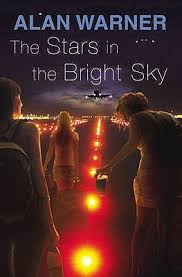 The librarian said you’re going to love this book. It’s exactly how young girls behave when they go on holiday. She was buzzed about it and even smiled.  And it was longlisted for the Man Brooker Prize in 2010. But any good stories got a BUT, I use them a lot. The laws of diminishing returns apply here.

I did love Morvern Caller, Alan Warner’s debut novel.  The Sopranos was great, six eighteen-year old girls from a Catholic school and a wee town about forty miles from Fort William hitting the big smoke of Edinburgh and giving it hell.

Here we have six twenty-one year old women, five of them from a wee Scottish town…hitting Gatwick airport, where nothing happens twice. Orla from The Sopranos is dead. We learn from Finn her dad was upright at the funeral but cried for three days when his neighbour’s cat died.

Or as Finn puts it when she bursts into tears and goes to hide in a Gatwick toilet, ‘When I come to write the book, Kay, it’ll be called: “Tears in the Toilet Cubicle: Our Social Circle’’.’

A toilet cubicle is where the action is in this and Warner’s previous novels. Gatwick Airport doubles as one big toilet from Friday Evening when the novel begins to Tuesday, when it ends, with bars and daft dancing machines and hotel room and drink. Drink pays a big part in Scottish culture and these young girls rip into it from a young, too young, age. Hey, the books say, you’ve got to love them, I did it too and that’s part of what gives Warner’s books its spark. #Me Too.

You can tell a lot from what a young lady drinks. And Warner like his list of music preferences, clothes and make up, gives the reader lists.

Ava has taken the place of Orla from The Sopranos. She’s rich and very thin and pretty, an outsider, a bit like Kay was in The Sopranos that becomes central to the story.

With the jazz of so many voices clamouring to be heard it’s often difficult to tell who is who. In the Sopranos I often lost the thread of which character was speaking, but the narrative carried the book to its conclusion. This happens for me here too.

Look at the drink list above and you’ll see Manda Tassy stands out. A bit rougher than the rest, a bit of crude, when crude is the language of rude. She was a minor character in The Sopranos. Here she is central, more so than The Mighty Finn or sophisticated Kay, who falls apart, as they all do in their different ways. That’s part of the fun, falling down and getting up again. Manda is a running gag in the book, a plot point, detested and loved, in an oversized glass measure.

Laurel and Hardy with pretentions and the narrative often switches to Manda’s point of view. Can she carry the book, in the way that Morvern Caller? Nut. She’s just an annoying cow.