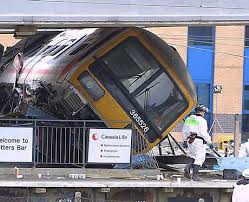 The Trouble With Our Trains, BBC 2, 9pm.

Twenty years after privatisation, in which the number of rail passengers have doubled,  Nick Hewer and Margaret Mountford examine what was once British Rail, but is now a hotchpotch of different companies competing in the rail market. Only they aren’t. Four billion pounds of government money a year still subsidises the rail network and eight billion pounds are spent on fares, but after rail disasters such as Potters bar when seven people died when a train became airborne after hitting defective points, Network Rail, who admitted safety breaches, were renationalised and renamed Railtrack, who were responsible for the upkeep and upgrading of the railway infrastructure. Privatisation didn’t work and cost lives, but the experiment in which the government as paymaster that subsidies rich people to provide consumer value continues with rising fares and rising discontent among rail passengers.

I had no idea who Nick Hewer and Margaret Mountford were before the programme, but I gather Hewer is a businessman and Mountford models herself on dear Margaret Thatcher. Even she had to admit that it came as something of a shock to find that the one of the best examples of integrated and forward planning was in the country of her birth – Northern Ireland. But, oh dear, Northern Ireland Railways were never nationalised.

Hewer talks to a financial analyst who points out that the returns for train providers such as Virgin Rail at 3% to 4% on capital, which aren’t that great, but what he fails to say is the returns are like government bonds, with no risk and guaranteed, and the extras such as company executives wages that grown exponentially year on year with no great justification are not included in the profit, but the cost. In addition fines worth millions paid to, for example, Virgin Rail by Railtrack for not allowing trains to run is a scam that any racketeer would be proud. Let me put it quite simply it’s so lucrative that the company running Germany’s railways have invested in British Rail that is no longer British Rail, which  leave us, the poor British public, indirectly subsiding the surplus profit of a German network.

Hewer and Mountford conclude we can’t turn the clock back and all in all the public-private divide works and we’re doing not a bad job. Bullshit. Railways are a monopoly franchise. The government owns the railways, paying money to landlords to manage it for them makes ideological sense, but not economic sense. We don’t need to renationalise them, we just need to allow the cash cow that is franchising to run out and take them back into state control.