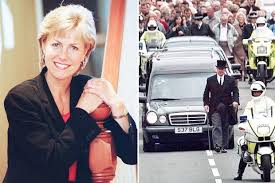 There seems to be a plethora of anniversaries and murder reconstructions on all of the main channels. We’ve had the Bulger, The Yorkshire Ripper and Jack the Ripper recently and before that Fred and Rose West. The list goes on. Partly, I’d guess to the world-wide success of The Making of a Murderer.  BBC couldn’t let the twentieth anniversary, 26th April 1999, of one of its own, the presenter of the Holiday programme, Crimewatch UK and The Six O’Clock News, without a commemorative mock-up of the main actors, talking heads and what we know about the killer. The Queen commented on Jill’s death as did the then Prime Minister, Tony Blair.

The police were under enormous pressure to bring the killer to justice. Detective Chief Inspector (DCI) Hamish Campbell, who led the investigation, features in the programme. He tells us how he came to identify Barry George as a suspect, how he came to be convicted of Jill Dando’s murder in June 2001 and released on appeal seven years later after the UK High Court ordered a retrial and the Court of Appeal found the forensic evidence in the case ‘inconclusive’.

Yet, we have DCI Campbell, giving the impression he got the right man. The evidence was circumstantial. After five months, the police were getting nowhere and had spent over two million pounds on the investigation. A tip had come from Hafad Taxi Company that someone, later identified as Barry George, had been acting strangely on the day Dando was killed. Six months later he was still acting strangely. A warrant and search of his house found that he’d filmed women, kept a log of car numbers and had press cuttings of Jill Dando. He also has a three-quarter length coat.

I must admit to also having a three-quarter length coat. My partner Mary hates it and wants to give it to the Salvation Army of some other charitable institute. But I’m quite oddly attached to it.  I was never a suspect in Dando’s killing.

Let’s get to the forensics on which the case was won and lost. Locard’s principle, sounds very much like Sherlock Holmes’, ‘every contact leaves a trace’.  A single particle of gunshot residue was found in the three-quarter length coat Barry George admitted to wearing. To describe it as gunshot residue is to place Barry George in the coat and have him pull the trigger and shoot Jill Dando on the doorstep. Such is the power of forensic evidence to captive a jury and convict Barry George.

Remember the newspaper headlines ‘Auntie Annie’s bomb-making factory’ associating trace elements of nitroglycerine with the Maguire Seven. Trace elements that were found in handling an ordinary pack of playing cards.

A single particle of gunshot residue would have to be magnified around 2000 times before it was the size of a pea. How else could it have got into Barry George’s pocket? Someone handling guns, perhaps a policeman, could have brushed against him on public transport.

The Crown won and lost its case on a single particle of evidence. Barry George in Scottish law would be found Not Proven. The hunt for Jill Dando’s killer goes on – only it doesn’t. The police have no new leads.  Case closed.