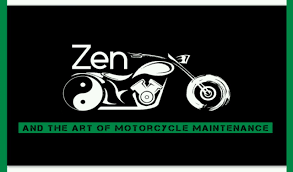 Robert Pirsig’s  Zen and the Art of Motorcycle Maintenance was the zeitgeist book of the seventies. Like Harry Potter but for adults it came with its own mythology. The reader can study pre-production notes between James Landis who commissioned the book for the publishers William Morrow and Robert (Bob) Pirsig. In a note by Bob Pirsig dated June 15, 1973, the author admits to anxiety and moots changing the title of the proposed book from  Zen and the Art of Motorcycle Maintenance to ‘The Bendable River’. Landis dissuades him. In earlier correspondence admits the book ‘is not a marketing man’s dream’.  Robert Pirsig’s book was rejected by 121 publishers and he didn’t write his novel but live it. It wasn’t considered ‘“commercial” in the way that term is understood by most people in publishing’, but prior to publication was judged a work on genius by among others book reviewers on the New York Times.  After publication Robert Redford bid for the rights to film the book, which was rejected. But what would a film of Zen and the Art of Motorcycle Maintenance look like?

I can’t remember when I first read Pirsig’s book. I guess late teens, perhaps early twenties. I loved it. Pirsig’s IQ measured aged nine was 170, he was a child prodigy with, we later learn, ‘a near photographic memory’. I don’t know what the opposite of photographic memory is and if I did I’d probably forget it, but if anybody asked me what the book was about I’d say it was about this guy that takes his son Chris, who’s aged eleven, on a road trip across the backroads of America on his motorcycle and blabs to him, and the reader, for almost 400 pages and also tries to emotionally reconnect with his son and explain he’s not the man he was, which is quite difficult, because he’s  emotionally guarded and not in touch with his feelings.  Pirsig jokes that if he were writing a novel he’d have to give an extended backstory.

On a motorcycle, ‘You’re in the scene’.  There’s a comparison with cars and the way the world is experienced. ‘Through a car window…everything is just more TV. On a motorcycle you’re an active participant in life. In a car, a ‘passive observer’. This is a value judgement. In the theoretical, film of the book, a world-weary narrator played by someone like Harry Dean Stanton would explain how to fix a motorcycle isn’t just a question of mechanics, but a question of life and who you are and who you want to be at that moment and in the future. He’s nostalgic for a simpler life (that probably never existed) when ‘a sort of Chautauqua… a travelling tent show, moved across America, this America…giving popular talk shows to improve the mind.’ He compares this unfavourably with faster paced radio, movies and TV. This is another value judgement. And now the narrator tells the reader about his friends John and Sylvia.

In other words, there’s something about modern life that is alienating. She is in agreement with the narrator, but offers no solution. The narrator’s quest is to find out what it is and where it comes from and perhaps suggest a tentative solution to this ‘mass hypnosis’. It’s in the title of course. Zen.

But John and Sylvia differ from the narrator. They are romantics. John, for example, buys a BMW motorcycle and doesn’t want to know about mechanical problems. He just wants the bike to work and if it doesn’t work it has nothing to do with him. The narrator is more a classicist. His classical education allows him to suggest an extensive nomenclature of tolerances and intolerances of different parts. But he comes unstuck when an elderly welder fixes the bike guard in a manner closer to art for art’s sake than his understanding allowed for. Rationality is always bounded. In Phaderus’s face off with Chairman of the Committee of the University of Chicago he raises his hand to contradict the speaker and suggest the Socrates’ suggestions of duality between those riding the white horse of reason (classicists) and others the black horse of passion (romantics) was actually an analogy. In terms of drama, his photographic memory allows him to quote verbatim from the Chairman’s own writing, unseating him. Classicists had rather a romantic view of themselves as the bearers of light and truth. Evidence suggests it was based on common myth. Mass Aristotelian hypnosis which separates subject from object and bounded by rationality that is impermanent and not rational.

Quality is neither of the subject or the object, but  suggests no answer, but rather we ride both horses, simultaneously, as Pirsig did in his writing. ‘Aretê implies a respect for the wholeness or oneness of life, and a consequent dislike of specialisation. It implies contempt for efficiency, or rather a much higher idea of efficiency, an efficiency which exists not in one department of life but in life itself.’  Or as William McIlvanney’s great Glasgow detective Laidlaw said, ‘I don’t like questions. They invent the answers.’

The narrator can figure out how to fix almost anything mechanical, but he can’t fix himself. He works endlessly trying to pin down the idea of Quality. But ‘The number of rational hypotheses that can explain any given phenomenon is infinite.’ Sleeping four hours. Sleeping two hours. The journey back to self begins with self. Thoreau’s maxim, ‘you never gain something, but lose something’.

‘I could not sleep and I could not stay awake,’ he recalls. ‘I just sat there cross-legged in the room for three days. All sorts of volitions started to go away. My wife started getting upset at me sitting there, got a little insulting. Pain disappeared, cigarettes burned down in my fingers …’

You cannot recant without believe. Phaedrus was institutionalized and his brain zapped by electro-shock therapy as his carers tried to press the default button and reset him on the straight and narrow path to normality. I guess the world has moved on and we no longer use electro-shock and call it therapy.

I guess if we were making a movie of the book the Hollywood-type denouement is a bit too tinsel, Phaderus is giving a different font, which stands out on the page, so that when the ancient Greek Sophist, and ghost, behind the glass door that stalks the narrator as his alter-ego speaks to Chris, it’s not Robert Pirsig, but the man he was, admitting, no he was not mad, bad or sad. Just your normal genius. Amen to that.