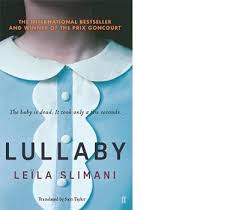 Lullaby, the bestseller and Prix Concourt, winner, written by Liela Slimani, sticks the ending at the beginning. I got to page 65, before giving up. I couldn’t shake the thought that I’d turned my back and that it had been written by software programme as nearly all books will in the future.

The baby is dead. It took only a few seconds…The little girl was still alive when the ambulance arrived…Eyes bulging, she seemed to be gasping for air. Her throat was filled by blood. Her lungs had been punctured, her head smashed violently against the blue chest of drawers.

The culprit, the nanny, is still alive, Myriam, the mother of the children, is in a state of shock. She lets out ‘a howl of a she-wolf’. Maybe something lost in translation. Cliched. What is left is backstory.

Here we have it, the set-up. Myriam and Paul have a nice little apartment on Rue d’Hauteville in Paris’s tenth arrondissement. Both are lawyers. Paul works in the music industry and Myriam has taken a break from her career –which never really started, pregnant at law school – to bring up their two children. Adam who is a baby, and Mila, eighteen-months older, a tot with tantrum issues.

They would like their children to go to nursery, but complain they haven’t the political connections in city hall, and they aren’t poor enough to get subsidised child care. In other words they’re upper middle-class and the poor are slackers.

In order to make the middle-class, more working-class, Myriam channels her frustration with bouts of kleptomania. She’s already rehearsed what she will say, she simply the forgot about the pair of socks, or whatever else she’s stolen, because she’s a harassed and muddled, mother. Not being a slacker, she decides she wants to go back to work. Then she bumps into Pascal, with whom she went to law school.

Voila. Pascal offers her a job. Here we have a floating point of view and see Myriam through Pascal’s eyes. Lazy narration.

Myriam and Paul need a childminder. They agree that they are poor and can’t really afford to pay much and ‘No illegal immigrants’.

Myriam approaches an agency that hires out nannies. Again we have that floating point of view. Myriam is snapped at by the boutique owner because she looks dowdy, with untended curly hair and here’s a corker, she can speak Arabic. She’s one of them that should really be living in the banlieues. That floored me for a second.

But here we are back with Myriam and she needs a nanny, but not like her, one that does live in the banlieues. Even a Filipino or African, she was not racist. As long as the nanny was cheap and Paul agreed. He’d need to be won over.

Now we are in Louise’s apartment. She does live in a studio apartment in the banlieue. She’s not Filipino or African and she’s so organised the window she looks through hurts from being over cleaned.  Her references are impeccable. We later find out she has a daughter.

Slowly, Louise moves herself spider-like into the centre of Myriam, Paul, Adam and Mila’s  myriad lives. She cooks, she cleans, she does everything they ask of her and more. Louise, aged forty, looks twenty, she is a dream come true.

The question of why she kills the kids? Dit moi. I don’t care.

I had a theory that HHhH stood for Hitler, Himmler, Heydrich, but I wasn’t sure who or what the other H stood for. I wasn’t sure why three of the H were capitalised and one wasn’t. I was wrong in the right way. Hitler, Fuhrer, number one in the Reich, Himmler perhaps with the largest powerbase and his number two, but it was Herr Reinhard Heydrich who was ‘killer bureaucrat’ and gloried in being known as ‘the most dangerous man in the Reich’ who fancied ousting his boss and  being number two, or possibly (whisper it) even number one.

We can talk of power behind the throne or  Himmler Hirn heisst Heydrich HHhH (Himmler’s brain is called Heydrich).

I don’t know if Heydrich did fancy being number two, or even number one and supplanting Hitler. That’s speculation, or as they say in some terrible telly drama, this was based on true events. Binet admits to knowing some of the facts, but not all of the time. He’s good at pointing out when fact becomes factional, or in plainer terms fiction. And it’s a wonderful guide, a kind of how to write a historical novel.

Fiction writers such as Julian Barnes begin writing a biography of Gustave Flaubert and ask difficult questions like why does the colour of Madame Bovary’s eyes change during the narration of Madame Bovary? Is this intentional or a textual error so unlike master craftsman Flaubert as akin to an adolescent putting his shoes on the wrong feet. This is Barnes’s jumping off point to writing something that is neither fact nor fiction, neither true nor false, Flaubert’s Parrot.

Binet does not parrot the facts of what we know, but covers the whys and why nots of those grey areas in which novelists grow like toadstools and show the before and after of Heydrich’s assassination, on the 4th June 1942 in Prague and the mass murder of the citizens of Lidice, the razing of buildings, the salting of the ground.

I still don’t have the book that Heydrich wife wrote after the war, Leben mit einen Kreigversbrecher (‘Living with a War Criminal’ in English, although the book has never been translated). I imagine it would be a mine of information, but I haven’t been able to get my hands on it.

Here he tells the reader about a night he spent watching a documentary about General Patton.

The documentary consists entirely of showing extracts from the film, then interviewing witnesses who explain, ‘In fact it wasn’t really like that…’ He didn’t take on two Messerschmidts that were machine-gunning the base, armed only with his Colt…He didn’t make such-and-such a speech to the whole army, but in private, and besides, he didn’t actually say that…He didn’t disobey orders and take Palermo…He certainly didn’t tell a Russian General to go fuck himself…So, basically, the film is about a fictional character whose life is strongly inspired by Patton’s, but clearly isn’t him. And yet the film is called Patton. And that doesn’t shock anybody.

It might have if it was called Patton’s Parrot. Binet’s intention is to write the truth about the assassination of Reinhard Heydrich and the reprisals which followed and it’s all there early in the text in Chapter 6 when he enters the church crypt in which the assassins died fighting to the last with 700 SS guards outside.

The props are there for the unfolding story told in the bullet holes in the vaulted ceiling, (here, I, the blog writer, am using fictional means to keep you the reader entertained, you don’t really need to know this)

There were photographs of the parachutists’ faces, with a text written in Czech and English. There was a traitor’s name and a raincoat. There was a poster of a bag and a bicycle. There was a Stern submachine guy (which jammed at the worst possible moment) [standing facing Heydrich and his driver when the car has slowed and stopped] All of this was actually in the room. But there was something else here, conjured by the story I read, that existed only in spirit…

Binet sets out to wrestle with that spirit and tell the story of the assassination and in exploring his own inadequacies somehow he makes the story more human, more believable, and more true. This is why HHhH won the prestigious Prix Goncourt and other awards. Not bad for a debut novel that is not a novel. Bravo.