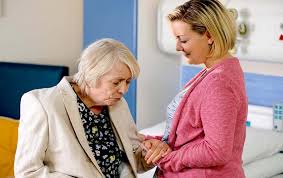 I like Jimmy McGovern’s dramas. Apart from Brookside, I’ve probably seen most of them. Care, well, it’s in the title. As a dramatist he’s got to make us care about single mum Jenny (Sheridan Smith) her elderly mum Mary (Alison Steadman) and the distant sister Claire (Sinead Keenan). And he begins with a car crash. Mary crashes the car with two kids in the back. Cue drama as we find out that the kids are fine, but Mary has suffered a stroke and now she has dementia.

A fragile family structure is smashed. Mary is no longer herself, but what McGovern does here is quite cute. The curled lip of Mary is given a voice. You know those text messages that appear onscreen to show the viewer what the protagonist is reading, texting, or thinking, that’s Mary thoughts as she gazes out at a world full of strangers she no longer understands or trusts.

I’ve got a bit of previous here. My mum, God bless her and may she rest in peace, had dementia. Like this drama my sister was the main caregiver. I felt that guilt and relief it wasn’t me that had to put my life on hold that Jenny dramatizes. Alice Munro draws on this experience for a number of her short stories. And the more courageous women walk away. It’s always women, of course, that does the care giving. That’s a given. And at one point Mary escapes from the dreadful home she’s been shoved into. My mum also escaped from the home twice, but it wasn’t that dreadful and I liked the staff. I felt guilty about not visiting my mum much, it was just up the road, but I reasoned she didn’t recognise me and someone else was doing the caring. I admit I was and still am a selfish bastard.

At one point my brother phoned and I’d the sound down for about fifteen minutes. The drama went on much as expected. There’s a builder in to convert the family home to make it a fit cage for Mary, and to make it easier for Jenny to care for her daughter and her mum. Jimmy McGovern (I think) once said it was his job to make things worse. No help needed in the chaotic fudge of the care system, but there’s got to be moments of light. So it’s pretty much a Mcgiven that the fit builder is going to fancy the pants off battling Jenny and is someone that shows he cares. He is handy enough to replace the feckless husband who left her penniless, stranded and got his new girlfriend pregnant.

We know that battling Jenny is going to overwrite all wrongs and find her mum a place of safety and a place of care in sunny, green countryside.

So who’s the bad guys here? Well, first up, is our glorious NHS. Even Tory scum know they are unelectable if they are shown to be killing off the NHS, but they do it by privatising the bits we don’t really care about. Old people are the ultimate bed blockers.  Like Mary and like my mum, they have multiple conditions that need treatment for which there is no cure. Bed blockers need to be gotten rid of, pronto, so here we have the professionals, the consultants, the physiotherapists, the social worker, the nursing staff all lining up like good little bureaucrats passing the buck and blaming each other, the fall guy, is always a woman, and in this case it’s Jenny’s mum. But it could and will be any of us. Richard Holloway says it openly we go to war against individual medical conditions and lose the war against common humanity. We are kept alive, but with no proper life at the end of it.

Back to the storyboard. Which icon takes on a polemic role of actress? Well, we’ve got the well-meaning woman that works in the shitty home Mary is sent to. She explains that she loves her job, but she’s expected to do too much and there’s not enough time and too many residents all crying out for attention and the owner is really a nice guy but he’s barely making a profit. That’s a lot of targets on anyone’s back.

Care work is low status, low paid work, done mainly by woman on the minimum wage and it’s the one growth area of the economy. The maximum wage is the minimum wage. And let’s face it we just don’t care.

The second part of the polemic that some poor home owner is doing his best but is getting ripped off by local authorities not willing to pay enough and a government that doesn’t care. Let’s just say most care homes are run by corporations that make honking profits for their shareholder and the money taken from poor people in taxes could be better spent elsewhere. So don’t look for any sympathy here.

Let’s get back to the real issue. Bed blockers. For that part of the polemic we have a nurse that doubles up as a demagogue that does what she has to do to make sure the NHS doesn’t pay for personal care. Let’s just say the middle-classes have this sewn up. They demand and get the best of things and don’t want to pay for it. If your mum or dad rots in a chair, they talk about personal responsibility. When it’s their mum or dad we start talking about resources and care deficits. Let’s talk about class and those that lack it.

Care as an hour-and-half drama is alright. As propaganda it falls far short of the clear-farsightedness we need. The simple facts are poor people get screwed. Poor sick people are doubly screwed and most folk don’t give a fuck, until it’s them and theirs. But with this happening to more people it becomes part of the political issue. It even pops up here as a BBC 1 drama.