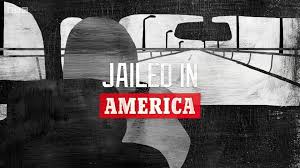 Roger Ross Williams recalled the time he first attended school in his home town of Easton, Pennsylvania and a white kid called him ‘nigger’. The white kid’s mum chastised him and told him not to do that or he would come and burn their house down. Here we are in Trump’s America, before the moron’s moron got to play at being presidential. Here we are in Trump’s America where $265 billion of Federal funds is annually allocated to jail 1 in 3 black men. As profits grown year on year, costs are cut. The quantity and quality of food, for example, for the richest nation on earth, would shame any third-world country – and it’s getting worse. A prison system that jails 2.2 million of its citizens, more incarcerations than every other nation combined. A prison system that is predicated on a simple model of taking money from the poor, incarcerating them and giving the tax dollars to the rich. Jim Crow didn’t go away, he just grew up in a different way.

Here is Ross William’s personal account of what happens to black men that don’t make it, like his old school friend, Tommy Alvin that committed suicide, leaving a daughter behind. We learn he had mental health problems, as do an estimated 67% of prisoners. Alvin was kept in a bubble, a type of transparent cage in a penitentiary for those on suicide watch. He was given a paper suit to wear.

Nothing I saw in this programme surprised me, apart from what seems to me the naïve belief of those like Adam Foss, an activist that attempts to re-educate the 31 000 public prosecutors about the real cost of jailing black people that if they knew the facts their attitude would change. It reminded me of stories of if the king only knew how us peasants suffered he’d be sure to act. If Hitler only knew how us poor Germans suffered he’d be sure to act. If Trump, the moron’s moron only knew…he’d be delighted. Not that he’d ever watch a documentary like this.

Karl Marx’s theory of surplus value shows exactly how important ‘worthless’ prison labour is to the economy. We did have one governor explaining to us ignorant viewers how it works, because in the real world prisoners don’t pay for their food, they don’t pay for their healthcare and they don’t pay rent. Slave owners on plantations used the same argument, it led to civil war. Here we are met with generalised indifference.

Marx, who knew a thing or two about propaganda, has a message from the past, for successful filmmakers like Ross Williams:

The philosophers have only interpreted the world in various ways, the point is to change it. [italics my own].

Here we are preaching to the converted.

First they came for the socialists, and I did not speak out—
Because I was not a socialist.

Then they came for the Jews, and I did not speak out—
Because I was not a Jew.

Then they came for me—and there was no one left to speak for me.

Amen, to the German Lutheran pastor Martin Niemöller (1892–1984) who foresaw this mockery of natural justice.