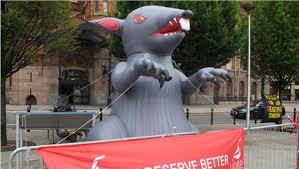 I prefer books but I’ve got a Kindle. I’ve downloaded Katy Brand’s Brenda Monk is Funny and read about 16% of it (Kindle doesn’t do page numbers). Brenda Monk isn’t funny, but the novel does give an interesting and readable account of the British comedy circuit. Dominic Frisby claims to be a comedian. I’ve got to about 11% of Frisby’s book and I’m sure he is.  It’s Social Darwinism in its purest form, laissez-faire capitalism doesn’t work because it is being constrained by interference—primarily by the state.  Reagan and Thatcher didn’t work because it was the wrong kind of capitalism, interfering ‘crony capitalism’.

‘Centrally planned economies are always outperformed by disorganized, apparently chaotic market systems. South Korea, for example, is example, is some 15 times more prosperous per head than its neighbour in the north. In the Soviet Union…’

Standing on the shoulders of pygmies you can always pick on the smallest guy in the room. My corner shop outperforms North Korea, but I’m sure quite a lot of planning goes into it. Citizens of South Korea also tend to be taller than those in the North. They are simply better fed and as a result have taller kids. The post- Second World War Japanese economy like most in the Western World experience GDP growth of 2% or less per annum. China with almost half of the world’s population experience GDP grow of over 10% in recent years but this has slowed.  Their citizens are not prosperous enough to be tall. But whisper it, China is buying up most of free-market Africa, owns large chunks of America in safe government bonds and is preparing to feed that population when global drought kicks in with global warming. But the cruel irony is China would already own South Korea where most of the Nationalist Chinese army had fled, but for government interference. Vice-versa had not Marshall (of the Marshall Plan) not dictated a ceasefire in 1946, the Nationalist Army, which outnumbered Mao’s by three to one, and where better organised and equipped, and China would not be Communist. Let’s put it crudely. South Korea is better than North Korea because the government doesn’t interfere (don’t mention the Korean War) and we are better than them. Discuss.

Toss a Frisby back to the start of his book. ‘Why Every Cuban Father Wanted His Daughter To Be a Hooker’ is the prologue. Frisby is in his twenties. He’s rich enough to be able to visit Latin American countries. Havana, he tells us, ‘was an amazing place’.  He had went there with preconceived notions. Cuba had the best health service in the world and the best education (hey, and I’ll fling in the best boxers). But he was quickly put right by Luis a doctor he lodges with ‘What is the point of a great hospital, if there is no medicine…What is the point of great schools when you have no paper?’ To make ends meet he estimated 50% of Cuban woman under 40 sell sex for US dollars.  In Havana he has a Damascus moment when he realised any kind of interference leads to the law of unintended consequences. (shown satirically here http://www.abctales.com/story/terrence-oblong/true-tales-austere-kingdom-%E2%80%93-disability-work-act)  What is more government Frisby believes interferes with a delicate ecosystem called capitalism and that causes untold misery and…well, you know the end of the story and the solution. ‘The central tenet of this book is the one big change the government need to make, apart from money reform, is that they do less’.   Privatisation is the way to god’s kingdom on earth.

Chapter 1 is a case study.  I’m in luck because Frisby is talking about my city. ‘How the Most Entrepreneurial City in Europe Became it’s Sickest’.  He tells us how in the eighteenth and nineteenth centuries Glasgow became ‘enormously, stupendously rich’. And it happened quite ‘organically’. Skip to the twentieth century and these entrepreneurial people became something else. ‘Heroin capital of the UK… murder capital.’ No Mean City.

But let’s start with the fairy tales.   Glasgow’s economic fortunes began and ended with the Clyde. ‘100 nautical miles closer to America’s east coast that any other British ports’. And during the time of sailing ships this offered a significant advantage. ‘The journey to Virginia’ for example, ‘was some two weeks shorter than the same journey from London’. Tobacco was a lucrative crop. This is his model of good capitalism at work. Tobacco lords creating a trading hub distributing the seed corn of capitalism in which everyone prospers.

Let’s take a step back and look at this in a different way. Geographical advantage is a given, but Scottish merchants were frozen out from transatlantic trading by the English government and the Darien Scheme in the seventeen century had almost bankrupted its government.  The English monopoly was replaced by a duopoly the English and largely Glasgow based tobacco barons. Trade was protected by the Royal Navy.  The goal of the tobacco lords in Glasgow was to capture the whole market. Monopoly capitalism works in that way and they did this successfully by bribing custom’s official, or in other words, theft. They paid up to 50% less than their competitors in tax. Of course if nobody paid tax the Royal Navy would not have been able to protect their boats or cargos. Every capitalist is a pirate and it’s not just trade winds that help.

By the turn of the twentieth century, Glasgow is Britain’s Second City.   ‘Between 1870 and 1914 it produced as much of one-fifth of the world’s ships and half of Britain’s tonnage.’  The turning point he suggests was the First World War.  Here’s a thought.  Too many of the ‘the entrepreneurs, the ideas men, [sic] too many of them were dead or incapacitated’.  There’s a problem of logic here, who or what is he talking about?  Would, for example, Lord Kelvin have come back from the war with shrapnel wounds and say that’s it I can no longer postulate a theory of thermodynamics? Who are these missing men and what are their ideas? If we don’t know how can we rationally discuss it?’ But if the reader moves onto the next qualifying line a clue is offered. ‘There was insufficient money and no appetite to invest’. ‘Insufficient’ for whom? And to ‘invest’ in what? In other words the landed gentry had made an aggregate loss during the war and they weren’t happy about it. They demanded a refund.  The answer of course was liberalisation. If you study newspapers of that era you’ll see the fuss about the lower classes coming back from the war and not being content with becoming servants.

Frisby shows how Glasgow’s endemic problems of poverty, ill health and lower-life expectancy was because they took the wrong path, because of ‘Red Clydeside’. For example, in ‘1911, 11 000 workers in the Singer sewing-machine factory went on strike to support twelve women workers who were protesting about a new work practice’. Glasgow housing was overcrowded, had bad sanitation and was ‘dirty and noxious’. Landlords were attacked for being unpatriotic and the government intervened to peg rents during a rent strike. In ‘Bloody Friday’ the prime minister deployed 10 000 tanks and troops onto the city’s streets.’  Worse was to come during the 1930s Glasgow became the main base of the Independent Labour Party. These are event which I can look back on with pride, but for Frisby a straight line runs from them to junkie city and serves you right. Do as you’re told and die then you’ll be happier. I could make the same request, fling him away and hope Mr Frisby and his ilk don’t return. If you want to read an adult account of economics read Piketty.